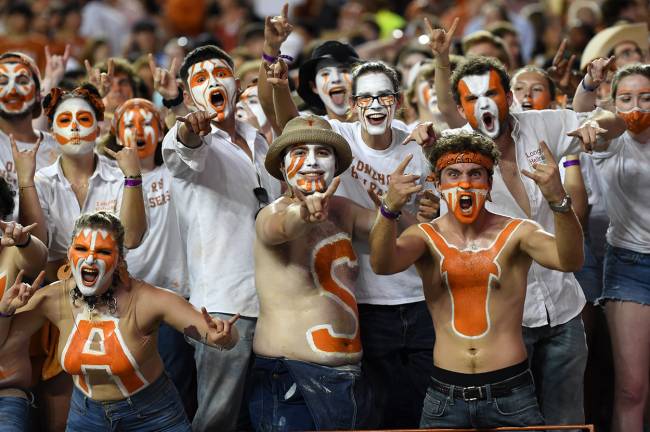 DeAndre Moore Jr. is the No. 9-ranked wide receiver recruit in the Class of 2023. He committed to Louisville on Tuesday morning and his decision has caused Texas fans to meltdown.

Moore, who stands 6-foot-0, 185 pounds, hails from Los Alamitos, California. His recruitment was nationwide and he chose the Cardinals over the Longhorns, USC Trojans, Oregon Ducks, Oklahoma Sooners and Alabama Crimson Tide, among 16 other offers.

Should Moore ultimately end up signing the dotted line this winter, he will be the third-highest ranked player to ever sign with Louisville. It was a massive get.

Moore has exceptional route-running skills and a fantastic ability to create separation with his speed and quick footwork. Once he gets past the defense, he is gone.

With Moore’s commitment, Louisville currently has the seventh-ranked class in the nation for 2023. The Cardinals are crushing it.

Back in January, University of Louisville interim athletic director Josh Heird said that he was planning a standalone Name, Image and Likeness department that was committed to putting more cash into Cardinals athletes and making the school a more attractive destination for top talent across all sports, according to the Louisville Courier Journal. In addition, Adidas announced an NIL network that will be open to all Louisville athletes near the end of March.

Despite the financial opportunities, DeAndre Moore Jr. said that NIL was not what made his decision. It was just an added bonus.

“Everyone talks about NIL and honestly, Louisville has a great program for that but that wasn’t even a top reason for me,” Moore said to 247 Sports. “That was more of an added bonus to be honest and wasn’t even a top 3-4 reason.”

In addition Moore said that he was down to Louisville and Texas in the end. Ultimately, it was the Cardinals who got his commitment.

“I loved Texas, great program for sure,” Moore said to 247 Sports. “Louisville just felt like home. It’s a great opportunity and I liked the idea of coming in and building almost from the ground up.”

As a result of Moore’s decision, Longhorns fans proceeded to completely meltdown. Even though he said that money was not a factor, Texas fans were furious about their NIL opporations.

One particular message board poster stood out. He completely lost it.