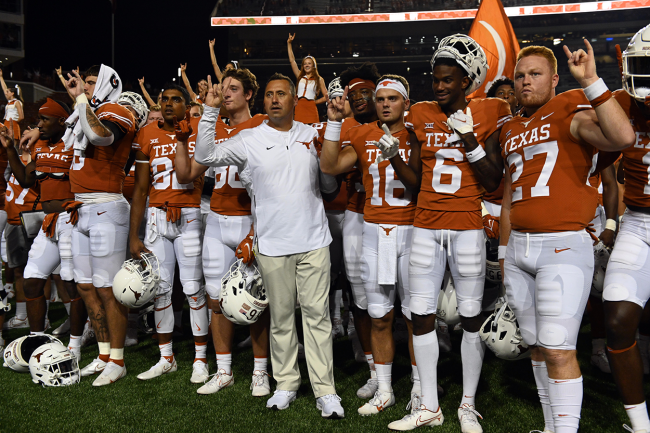 Former University of Texas linebacker Brian Jones is making bold claims about the current state of Longhorns football. The 53-year-old, now a national college football analyst for CBS Sports, claims that head coach Steve Sarkisian is being pressured to play certain players based on their race.

Texas is currently amidst a three-game losing streak and Sarkisian’s first year at the helm has been a dumpster fire thus far.

Jones’ claim only adds kindling to the flames. He joined 104.9 The Horn, UT’s flagship radio station on Friday.

He then went on to claim that he knows of donors who are pressuring Sarkisian into race-based roster decisions.

“There’s a lack of trust in that locker room, because guys are being told one thing to their face and then other things are transpiring because of all the other cooks that are trying to manipulate this football program. So, I don’t know how it gets fixed other than pleading with these five or six heavy-handed donors to leave the damn football program alone.”

“I thought we were all in this to win. And there’s no way you’re going to win when you’re asking or trying to dictate to your head coach who plays and in some instances it’s crossing color lines, which is definitely unfortunate.”

“But I’m not terribly surprised there, either. All you have to do is revisit those emails last year, a year and a half ago when we were discussing The Eyes of Texas. So, it’s just a huge shame and it needs to stop right now.”

Jones would not specify any of the details regarding the players that he was referring to in his claims. When asked to elaborate, he said the following:

“I don’t want to be a detriment to that program, and therefore I’ve decided not to share that. At some point, I may be forced to put that out there. But I’m not going to do it.”

According to Hook’Em.com, UT AD Chris Del Conte said that Jones is lying.

While boarding a flight to Texas’ game at West Virginia, Del Conte was quick to discredit Jones’ claims.

As the state of the program continues to be questioned, Texas plays The Mountaineers on Saturday and closes the season at home against the Kansas State Wildcats. The Longhorns must win both games to reach bowl eligibility.