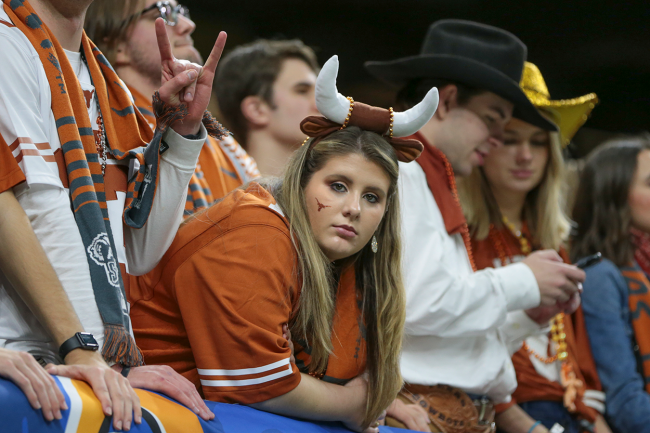 Texas football is very much not back. The Longhorns hired Steve Sarkisian as head coach to save the program in the offseason but his first year at the helm has not gone well.

In fact, it has been a disaster.

Texas lost its sixth game of the season on Saturday and is two wins away from reaching bowl eligibility with two games left. Regardless of how they finish the season, the damage has been done for the Longhorns.

Saturday’s loss was a nail in the 2021 coffin. Texas was a 30.5-point favorite against Kansas and lost. At home.

The way in which it happened was even more embarrassing. The Jayhawks jumped out to an early 21-point lead and simply held strong to beat a team that was ranked as high as No. 15 in the preseason polls.

The Longhorns tried to make a comeback in the second half and forced overtime, but could not stop the final two-point conversion.

Kansas fullback/tight end Jared Casey was a former walk-on. He had not played an offensive snap in a live, regular season game at any point in his career prior to Saturday. After a few injuries ahead of him, he was tapped to play on Saturday.

And he ended up catching the game-winning conversion to upset Texas on the road. It was a remarkable win for the Jayhawks.

It was also hilarious loss for the Longhorns.

The program is in disarray and a video from Saturday is the perfect example. Once considered to be a chance to show off during a dominant win in front of recruits, Texas had quite a few prospects in Austin for the game against Kansas.

Among those in the stands was five-star linebacker Harold Perkins. Perkins is a heavy Texas A&M lean, but was in town on an unofficial visit to allow the Longhorns staff a chance to make their pitch for a potential flip.

Instead, Texas could not have made a worse impression on Perkins. He posted a video on Instagram from the final play of the game and can be heard laughing at the burnt orange’s loss.

He was not just snickering, he was full-blown belly laughing in the face of Texas. Take a look:

5⭐️ Lb and 4⭐️ OT laughing at Texas on their OV…Sark is down BAD pic.twitter.com/ZbKMvo2ork

This is about as terrible of a look as it gets and it’s safe to say that Perkins will not be in Austin next year.

At the moment, Texas’ losing streak has not derailed its 2022 signing class thus far. The Longhorns currently hold the No. 7 class in the nation and the top class in the Big 12 with 22 commitments, and 15 of them are four-stars.

However, if the losing continues, that is subject to change— and fast. Perkins’ video is the perfect example of how recruits feel at the moment and it is not good.

THE FIRE IS STARTING TO SPARK IN THE DUMPSTER!