Report: Texas And Oklahoma Could Bolt For SEC Earlier Than Expected After Recent Big 12 News 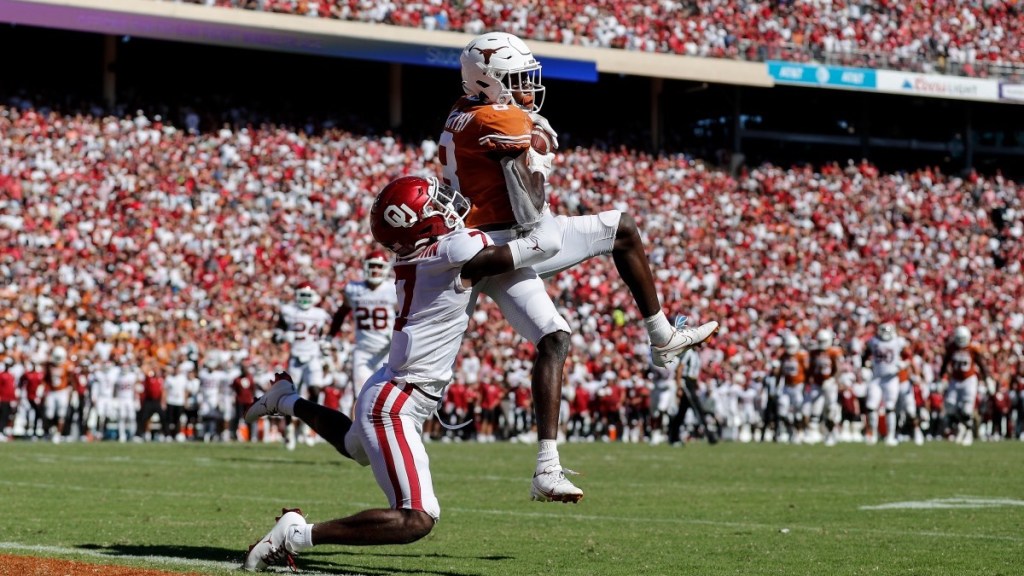 News broke early Wednesday that the Big 12 Conference was opening negotiations early with media partners ESPN and FOX. This came as a bit of a shock as the Big 12’s current media rights contract runs through the end of the 2024 College Football season.

From an outside perspective, it would seem to make sense that the Big 12 Conference would want to get in front of the media rights negotiations. Texas and Oklahoma are both set to join the SEC Conference on July 1, 2025.

That will immediately change the landscape of the Big 12’s reach and appeal. There’s also the ongoing conference realignment outside of Texas and Oklahoma, with BYU, Houston, Cincinnati, and UCF joining the Big 12 and USC and UCLA joining the Big 10.

Now, College Football insider and CBS Sports writer Dennis Dodd is sharing a shocking report that Texas and Oklahoma could bolt for the SEC sooner than expected… I swear that’s not an OU/Sooner pun, I just don’t want to say ‘earlier’ when sooner reads more naturally.

Dodd wrote on Twitter that the Big 12 starting early media rights negotiations ‘with rightsholders sources tell CBS Sports there are now active discussions regarding Texas and Oklahoma leaving early for the SEC.’ Here’s his tweet:

As a consequence of @Big12Conference starting negotiations early with rightsholders sources tell CBS Sports there are now active discussions regarding Texas and Oklahoma leaving early for the SEC.

Texas and Oklahoma would obviously LOVE to leave the Big 12 for the SEC as soon as possible. It might cause a bit of a scheduling nightmare next season but it would still be a good problem to have for the Longhorns and Sooners.

Dennis Dodd broke the Texas and Oklahoma component of this news on CBS Sports, writing:

Emphasizing the urgency of the proceedings, active conversations are ongoing as the Big 12 considers allowing Oklahoma and Texas to leave the conference early for the SEC, CBS Sports has learned. The two schools are bound to the Big 12 via their media rights deal for three more seasons.

“It’s definitely a piece of this puzzle, this OU-Texas separation,” said a source familiar with discussions. “Those conversations are definitely happening and are making accessible progress.”

If Oklahoma and Texas ultimately leave the Big 12 early, Fox would likely have to be made whole financially because of the loss of the two lucrative TV ratings winners prior to the end of the deal in 2025. Fox’s Big 12 valuation is based on those schools staying for the next three seasons.

The Big 12 Media Rights Negotiations and What’s Happening There

ESPN’s Peter Thamel reported early Wednesday morning that the Big 12 Conference was entering early contract negotiations with Fox and ESPN. He’s an incredibly reliable source so there’s no reason to not believe his scoop:

Sources: The Big 12 and its TV partners, Fox and ESPN, have agreed to enter early contract discussions about the league’s next television deal. The conversations will begin soon and come a year-and-a-half before the contract’s exclusive negotiation window. https://t.co/7MTWf2KPwY

However, a reported statement from ESPN (about an ESPN report?!?) appears to contradict the earlier report from ESPN’s own Peter Thamel:

Statement from ESPN to the Hotline:

“We regularly engage in conversation around the future with all of our partners, but to be clear, we have not opened the contractual negotiation window with the Big 12 at this time.”

Brett McMurphy of the Action Network read between the lines and pointed out that it’s a mere technicality because the negotiations won’t begin until next week:

“At this time” is technically correct because ESPN isn’t talking to Big 12 until next week https://t.co/jQTdheKH0R https://t.co/0C5BZdTSVz

What happens next for Texas and Oklahoma? And the rest of the conference realignment?

If all of this turns out to be true and both Texas and Oklahoma are able to bolt for the SEC Conference sooner than expected it’s likely bad for every other conference.

It will drastically impact the Big 12 Conference’s media rights negotiations. The SEC improves overnight. The Big 12 would be left with vacant spots until the four new teams join. The Pac 12, Big 10, and ACC then fall even further behind the SEC with the addition of Texas and Oklahoma.

The ripple effect from this could be massive.