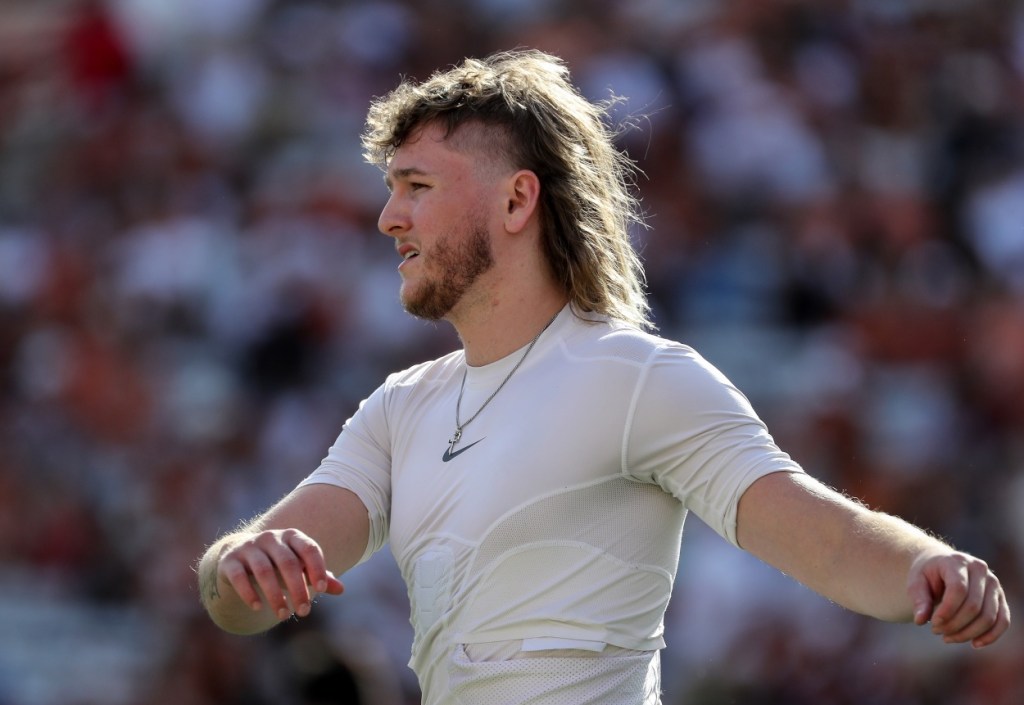 Every so often an NIL partnership comes along that’s perfect. Some recent examples of this would be Hooters signing 51 ‘big uglies’ to NIL deals including one player named ‘Wing’. Or this one from Nebraska’s Decoldest Crawford.

Another perfect NIL partnership to add to the list is Wrangler rolling out a partnership with a bunch of schools to release customized/branded Wrangler gear. The list of schools includes the University of Texas, Tennessee, LSU, Alabama, Florida State, Texas A&M, University of Florida, and others.

One aspect of this new Wrangler NIL partnership is star players like Texas Longhorns Quinn Ewers will be promoting the gear. This announcement launched with Quinn Ewers showing off the new Texas Wrangler apparel and it’s so hideous it works perfectly. It loos like the result of someone crossing Joe Dirt and Friday Night Lights.

Texas is partnering with the Brandr Group and Wrangler to launch a line of customized Wrangler gear.

Quinn Ewers, and other athletes, will help promote it: pic.twitter.com/iA7gndvsT5

Full list of schools in the Wrangler campaign: pic.twitter.com/KY149N7xTc

This man was born to rock all denim

I never thought an athlete could be more Wrangler jeans than Favre. I was so, so wrong.

Princeton alumni would actually go nuts for this and wear it ironically. Wrangler would be smart to roll it out:

the funniest possible Wrangler college collaboration would be Princeton, right?

are you even country if you don’t have a lifted raptor at 16 that you take mudding in the cleared land nearby that will be the next master-planned community adjacent to your own?

Guaranteed these fly off the shelves even if some disagree:

Quinn Ewers exudes the look of a man who always has grease or dirt rubbed on his face but nobody bothers telling him:

You heard it here first: Joe Dirt is my QB and he will play in a Canadian tuxedo. https://t.co/dfEBoWyBYB

Oklahoma resuses to be left out of the conversation:

Oklahoma is one in the collection of schools which will have a custom line of Wrangler gear (like the outfit Quinn Ewers has on here) out in September. https://t.co/goiOWBvGH3

This Quinn Ewers x Wrangler ‘fit is fresh. At some point in the past few years, we crossed the threshold from embracing mullets ironically and it was only a matter of time until that got paired with the Canadian Tuxedo look and Quinn Ewers is the perfect man to bring this look back.