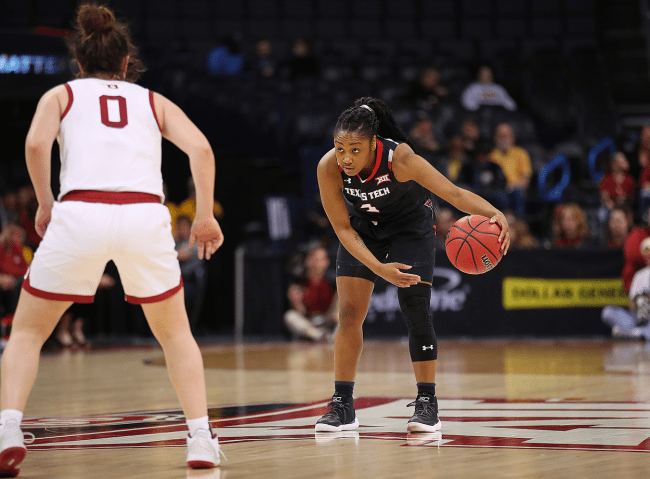 Earlier this month, an NIL collective in Lubbock, Texas signed 100 football players to deals worth $25,000 each. But they aren’t alone.

On Thursday evening, the Red Raiders women’s basketball team received the same news. Level 13 Agency announced that it is signing each player on the roster to a deal worth $25,000.

We are proud to announce that Level 13 Agency has committed $25,000.00 per Lady Raider in the Women's Basketball Locker Room! We see you, we hear you, and we support you ladies! #LΞVΞLUPLADIΞS pic.twitter.com/Io77uKnjz5

This is monumental news in the Name, Image and Likeness space. It not only marks the first deal of its kind within women’s basketball, but players on the women’s basketball team will be receiving the same amount of money as their football counterparts. That’s rare.

$25,000 is a large sum of money for anybody, but for a college student, it’s life-changing. And in a world where the starting quarterback or star point guard for the men’s basketball team is positioned to earn significantly more money through NIL than most female athletes, it’s a really special development.

The team’s reaction to the news is emotional and it speaks to just how much Level 13 Agency’s decision means to each of them.

Happy tears at the Womble after the @LadyRaiderWBB found out they would receive $25,000 each thru an NIL deal with @LEVEL13Agency. A historic deal for #TexasTech and women’s college athletics as well. #WreckEm pic.twitter.com/RsAShbRerf

All 14 players on the roster will receive $25,000 from the NIL marketing agency, totaling a total payout of $350,000. It is believe to be one of the largest, if not the largest deal of its kind for a women’s program.

To make things even more interesting, the Lady Raiders were seven games under .500 last year. Texas Tech went 11-18 and finished eighth in the Big-12. They were not very good.

Although there is hope that things could turn around some in 2022, this new team-wide NIL deal could be a significant asset in recruiting. That brings even more hope for the future.