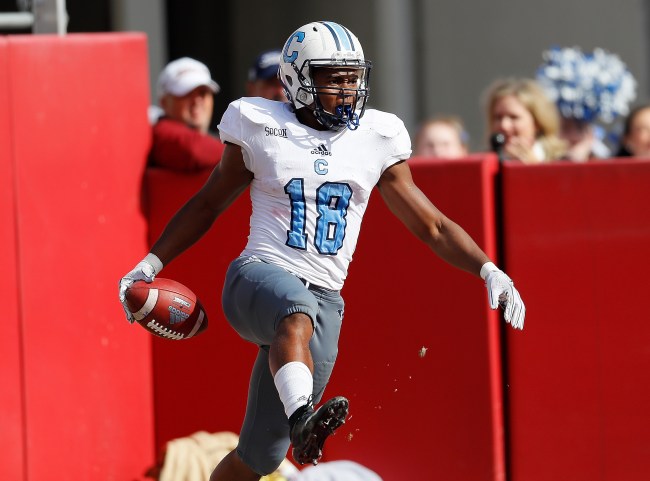 The Citadel football team was more than just an underdog heading into their matchup with the No. 1-ranked Alabama Crimson Tide in Tuscaloosa yesterday, they were pretty much left for dead before the game even kicked off. While The Citadel Bulldogs eventually ended up losing as many thought they would, 50-17, it took a helluva lot more work than Nick Saban and his Tide would have ever imagined, as the game was actually tied at halftime, 10-10.

Obviously, Bama’s superior talent took over from there and flexed its muscle, but, for at least 30 minutes, The Citadel made football fans think that, maybe, just possibly, there could be a Cinderella playing in November, and not just restricted to March Madness.

While the team ended up on the losing end, The Citadel’s Twitter account was more than enjoying the moment, as it took playful shots at the aforementioned Saban, Alabama and, oh yeah, a bunch of other SEC teams who failed to score as many points against the Tide as the Bulldogs did. Just look a look at some of these brilliant troll tweets.

The Head Coach is here!

It isn't that hard guys.

By the way,@OleMissFB we scored more points than you too.

Since we left a few of you out of the party yesterday,

.@Twitter we were the #1 trend in the country & can’t even get a check mark? pic.twitter.com/M3FnLZCMme

If they could give an award to the most lethal Twitter account in college football, The Citadel may have just won it unanimously. In fact, another Cinderella team, UMBC — who became the first No. 16-seed to knock off a No. 1-seed in the NCAA Tournament by beating Virginia last year — was even impressed with the amount of trolling by the Bulldogs.

The guy who runs The Citadel Twitter account, Parker King, wasn’t shy about his antics, saying that it was all in good fun, and that the reactions on social media were funny and entertaining, to say the least. Here’s what he had to tell AL.com about the experience.

“It’s been pretty surreal,” King said after the game in the room just off from the small visitors’ locker room in Bryant-Denny Stadium. “We knew if our players came in here and performed the way we knew they could, we would have a small window of essentially going viral on Twitter. We had a good plan that if we performed, we’d be ready. And we’d be willing to take some shots at some people in the SEC.”

“A lot of mad people but we knew that going into it and that was kind of the point,” he said. “We knew a lot of people would get riled up and really excited. A lot of our mentions were like ‘Hey, we were Citadel football now.’ So, it was good. It was really exciting to have a chance to be front of so many people and get so many people that aren’t Citadel football fans’ eyes our Twitter for football, for recruiting and the campus itself.”

“In this game, we don’t have a lot to lose,” King said. “A lot of eyes will be on our account after this week. We might as well have some fun with it.”

As Parker said, The Citadel had nothing to lose and were counted out before they even left their campus for the game, so, hey, at the very least, the school might as well have as much fun in the moment, right? Hopefully no other SEC school was too butt hurt over this — but, damn, they did get burned pretty bad with the tweets.