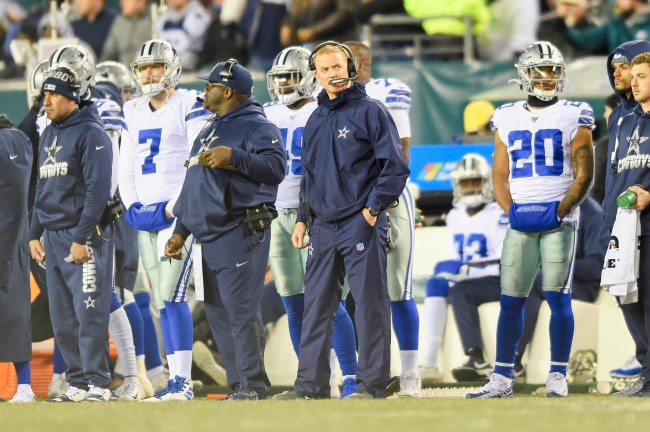 The Dallas Cowboys are having an awful day.

Not only did the Cowboys lose to the Eagles on the road but it seems like they’re going to be stuck in Philly for awhile because the team’s charter plane was deemed “not viable” to fly home.

ALERT: Putting a crappy capper on #Cowboys night in Philly: the team’s charter plane has been deemed ‘not viable’ for the flight home to DFW. Team officials are working to find another plane. For real. pic.twitter.com/7FLnaP3CpQ

Cowboys are ready to leave Philadelphia following today's loss, but they can't. Plane issues have them still on buses at Lincoln Financial Field. Game ended more than two hours ago. Airline working to solve issue. But right now, team is stuck.

#Cowboys source tells me the team’s charter plane has mechanical issues. So for the time being, they are stuck in Philly until they can find another. Can’t make this up

#Cowboys travel update: team is waiting on AA 777 charter to be ‘made viable’ while also planning on crowding large party into much smaller plane. Some travelers will be asked to stay behind in Philly. pic.twitter.com/hzwNDynYUT

The #Cowboys currently still on the buses at the Linc. No update on a new plane or the current one. They have been here for over an hour now. pic.twitter.com/Yk9Oy7uTEW

Update: After waiting several hours the Cowboys finally have a plane ready for them.

The Cowboys are finally headed to the airport. They have secured a plane.
J.J. The Jet plane https://t.co/5Kk9hdlif7

Of course fans had jokes about the Cowboys plane acting up.

Cowboys chartered plane apparently deemed “not viable” so stuck in Philly. The jokes write themselves.

This is a perfect metaphor for the Cowboys season. https://t.co/L0ejDO7enX