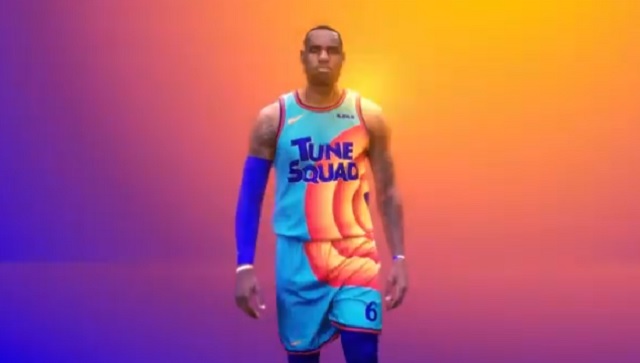 Last week we learned that LeBron James’ new Space Jam movie had wrapped up filming after TMZ leaked audio of the superstar’s emotional farewell speech on the final day of shooting.

“I’m gonna be honest completely with you guys — when I found out about the project, I was like it’s ‘Space Jam’! It’s a movie that I grew up watching. People in the movie that I idolize. I was like absolutely, I gotta do it. There’s no way I can turn down ‘Space Jam’!”

“I’m just a small kid from Akron, Ohio — a very small town outside of Cleveland. From a single-parent household, I’m the only child, my mother had absolutely nothing. She was walking around high school when she was 16 years old and she was pregnant with me as a high school sophomore. So I’m really not supposed to be here.”

During Monday night’s playoff opening night, LeBron and his team officially unveiled what the new Tune Squad jersey was going to look like.

Would it be the Family Reunion without a special surprise?! @mavcarter gives our I Promise families the first ever look at @KingJames in his @spacejammovie ‘A New Legacy’ jersey! 👀🔥 pic.twitter.com/XsPYL1dvcU

The new Tune Squad jersey got crushed by the Internet.

LOL not too late to throw these in the garbage and start over https://t.co/Q9dEMu4xe5

Why are the new #SpaceJam jerseys so bad? The classic ‘Tune Squad’ uniform was perfect. pic.twitter.com/UeZK0VQHoN

MAN that is an ugly uniform. Good thing this isn't a real movie.

We need to cyberbully these into improvement like we did Sonic The Hedgehog. https://t.co/ALS1Oej9Bu

This is a CRIME. Someone needs to go to jail. https://t.co/tZkS9vkr20

Reason 36 not to watch this movie https://t.co/XJf68M4plK