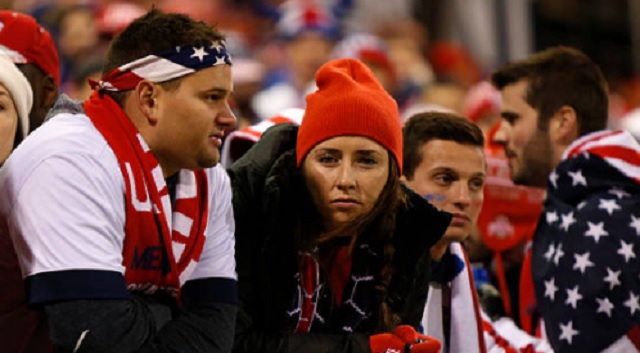 After a devastating loss to Trinidad and Tobago on Tuesday, the United States Men’s Soccer Team has officially failed to qualify for next year’s World Cup.

This a huge bummer for American fans who wanted to root for the USA in the upcoming World Cup in Russia.

The #USMNT will not be going to the 2018 World Cup

First time since 1986….the #USMNT is out. We were too comfortable with the status quo. Time for change, baby. It’s always darkest b4 dawn.

When I die, I want the #USMNT to lower me into my grave so they can let me down one last time.

All I’m saying is #USMNT qualified when Obama was president pic.twitter.com/Hfu5UGczTr

Can’t have a heartbreaking loss in the World Cup quarterfinals if you don’t qualify for the World Cup #USMNT pic.twitter.com/Ey4K3zrD6b

Anyone feels #USMNT still deserves to be paid more than #USWNT when they can't even qualify for the World Cup, I'd love to hear your logic

The #USMNT is an embarrassment. I don't even know what to say. The beautiful game deserves to be played with more passion than that. Ugh…

Best way to grow soccer interest in the US…..do not air WCQ qualifying on tv. 👍 #USMNT

#USMNT embarrassment to American Sports! WTF! Lost to T&T with a World Cup birth on the line! Change everything except Pulisic. #USAvTRI