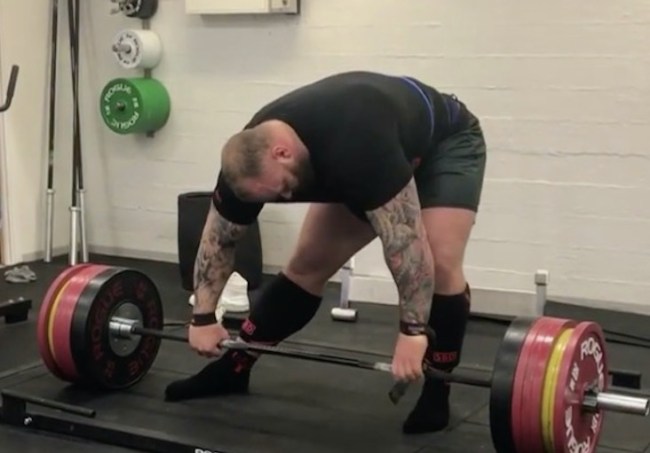 Hafþór Júlíus “Thor” Björnsson has officially become the most famous person in Iceland. For a while, that honor went to Bjork, but ‘The Mountain‘ from HBO‘s Game of Thrones has usurped her from the throne of fame.

Thor was deadlifting 727-pounds (3 sets of 2) during a recent workout that was so intense he published multiple videos on Instagram of his feat:

Here’s the thing about Thor Bjornsson, when I see him workout I’m often reminded of how I feel anytime I see a chihuahua. Every time I see those tiny ass dogs my first thought is ‘how in the hell did chihuahuas ever descend from wolves?’ When I see The Mountain working out I wonder how in the shit he and I have a common ancient ancestor (all humans do) because he’s on a whole different planet. He’s more God than Man, and in this scenario, I’m the chihuahua.

I was in Iceland last month and didn’t see him, which I’m kind of bummed about. There are only about 300,000 in the entire country, so I figured my chances of bumping into him on the streets of Reykjavik were actually pretty good. Alas, I never found The Mountain and was forced to talk with the nicest people I’ve ever encountered. Seriously, everyone in Iceland is somehow always in a good mood and they REALLY want to talk to you because they’re so darn friendly. It’s amazing. Go visit Iceland in 2017, you won’t regret it.