Rumors: Lincoln Riley Might Not Be Done Sabotaging The Oklahoma Program 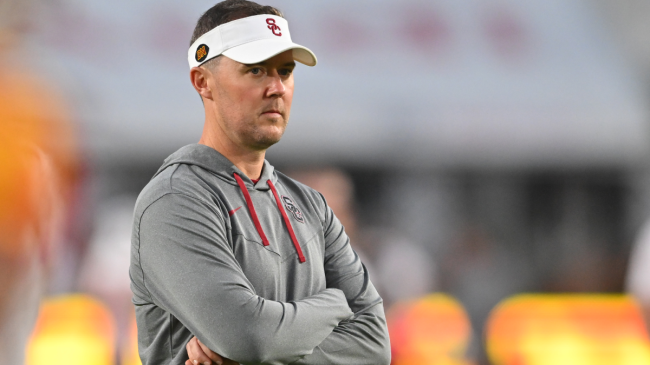 Lincoln Riley is the most hated man in Norman after the way he left the Sooner program this past offseason. Rumors involving WR Theo Wease could soon add to that hatred.

The former Oklahoma head coach bolted for sunny Southern California following the conclusion of the 2021 campaign, leaving the Sooners high and dry. In leading the team for five seasons, Riley posted a 66-11 overall record and found his way to four College Football Playoffs.

Rather than continue to build upon the foundation laid at OU, though, he opted to head for the Hollywood Hills somewhat unexpectedly. Many said that had something to do with Oklahoma’s decision to join the SEC, which would make that path to a championship more difficult.

Going to USC, where he’s a big fish in a little pond, caused many to be critical. But in Year 1, it appears that the move is paying off. He’s got the Trojans in the playoff hunt with a 10-1 record. That resume can further be bolstered with a win over Utah in the PAC-12 title game on Saturday.

Much of the success this season has been found on the backs of former Oklahoma players, most notably, Heisman favorite Caleb Williams. A number of high-profile players chose to follow Riley to Los Angeles, which certainly upset the folks in Norman. Not only are they now watching USC excel with their old stars, but it depleted many key areas from the Oklahoma roster leading to a 6-6 season.

Unfortunately for Sooner fans, the nightmare might not be over.

Former 5-star WR Theo Wease is rumored to be transferring.

Per a source close to him, Oklahoma wide receiver Theo Wease is expected to enter the NCAA Transfer Portal. Wease has 1,044 career yards and 10 touchdowns. He will be a graduate transfer with two years of eligibility left. @247SportsPortal @chris_hummer @BrandonDrumm247

And the rumored leader to land Theo Wease’s services? You guessed it, USC.

Wease was recruited by Lincoln Riley, which would make the move a somewhat easy one. Recent social media activity from Caleb Williams has many believing the transfer is already in the works.

Williams retweeted a pair of Theo Wease highlights from the Sooners’ win over Oklahoma State this past weekend.

Should Wease ultimately decide to leave and land at Southern Cal, if would give OU fans yet another reason to despise Lincoln Riley. The Sooners can’t seem to escape the ghosts of coaches past.