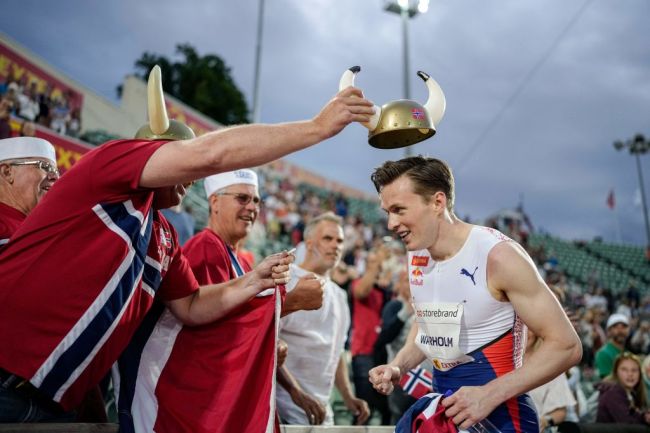 Karsten Warholm broke the longest-standing record in men’s track on Thursday and he did it in front of a home crowd. The two-time world champion is only 25 years old and hails from Ulsteinvik, Norway, about seven hours north of Oslo, where the IAAF Diamond League meet was held.

Warholm is a 400-meter specialist and now owns seven of the top 15 times in history, including the world record. The Norwegian came into the meet chasing a 29-year-old world record set by American Kevin Young at the 1992 Barcelona Olympics.

He clocked 46.70 seconds at the meet in his home country, finishing .08 seconds faster than Young and breaking the record. The roar of the crowd as he comes down the final stretch and crosses the line will give you chills.

Karsten Warholm clocked 46.70 in the 400m hurdles at a #DiamondLeague meet in Oslo to break the longest-standing record in men's track. pic.twitter.com/TWhwgA5MGH

The Norwegian broadcast call is even better.

“I knew that I had a fast time in my body — it feels like it as been there for a long time but you never know when it is right to do it,” Warholm said, according to meet organizers. “And it is one thing to know you have it in you and another to go out and do it.”

Warholm’s time comes just five days after American Rai Benjamin ran a 46.83 at the U.S. Olympic Trials. At the time, it was the second-fastest run in history. Now, it is the third.

Rai Benjamin is headed to Tokyo after setting a new Trials record!

Joining him are Kenny Selmon and David Kendziera. (Via @NBCOlympics) pic.twitter.com/WtYuum1hiV

These ridiculously fast times are going to make the Tokyo Games very interesting.

“It might take another world record to win the Olympics,” Warholm said. “There rare such a lot of great guys out there at the moment who will all be aiming to do it and win gold.”

To make the event even more intense, Qatar’s Abderrahman Samba is the fourth-fastest man in history behind Young, Benjamin and now Warholm. The finish between the three active runners is going to come down to the wire.