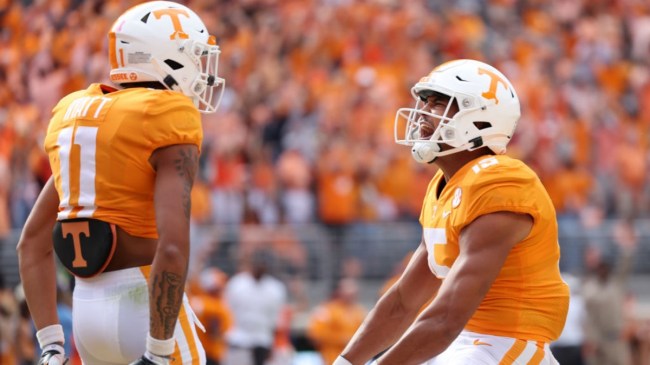 Last weekend, the SEC gave the college football world the gift of the best game so far this season.

The game saw the #3 Alabama Crimson Tide traveling to Knoxville to take on the #6 Tennessee Volunteers. The matchup turned into a back and forth battle between two undefeated squads.

After a wild 60 minutes, Tennessee ended up being the team to prevail by a score of 52-49, setting up another massive matchup in the SEC.

This time around, it will be the Volunteers doing the traveling as they head down to Athens to take on the Georgia Bulldogs. The Bulldogs are also undefeated, winning their first 7 games by an average of 32.6 points per game.

The clash between Tennessee and Georgia should determine who will represent the SEC East in the SEC title game and the winner will likely guarantee themselves a spot in the College Football Playoff.

With so much potentially riding on this game, the ticket prices for this SEC matchup have skyrocketed. According to “Saturday Down South”, tickets currently start at $625 after fees.

Tennessee @ Georgia tickets are starting at $625 after fees. pic.twitter.com/4zWbeCmdNH

It’s no surprise that ticket prices have gotten so steep even 3 weeks ahead of this matchup. The game between Georgia and Tennessee could be the most important one left in the college football regular season. If both of these teams continue to win, even Ohio State-Michigan won’t be quite as meaningful as this matchup.

This was definitely not expected to be such an important game when the schedule was released this year, but now it’s one that absolutely every college football fan will have circled on their calendar.

Just 3 teams stand between these two teams and a matchup as 2 of the 3 remaining unbeaten in the SEC.