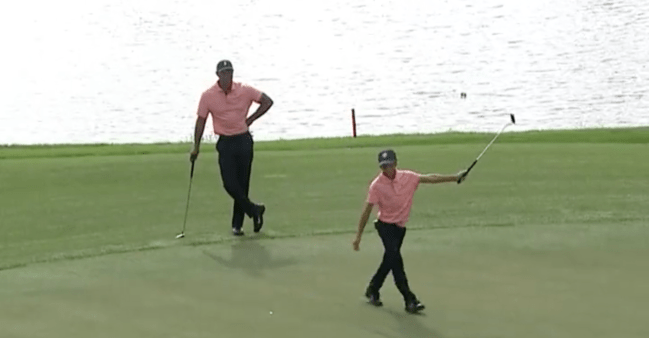 After a less than a year since his near-death car accident, Tiger Woods returned to the golf course for the first time this weekend. Although the comeback story was incredible, it was Tiger’s son Charlie who stole the show.

The Woods duo are competing in the PNC Championship Pro-Am tournament this weekend and their similarities are uncanny.

Tiger spoke about his game and thinks that he could be even better than he is.

“I didn’t have speed like that at that age,” he said. “I was probably a little bit taller than Charlie is at that same age. I was skinny as a rail. I looked like a 1-iron.”

Charlie’s club speed was not the only thing on full display. He was absolutely dialed on Friday and nearly sunk his approach shot on the 11th.

Charlie Woods with a beauty to an INCH. 👀 pic.twitter.com/NGL0ByIx5f

The Woods duo was in-sync all afternoon and evening during the practice round.

That was the case again on Saturday when the two began the day with a birdie.

Later in the round, Charlie went full savage mode. After hitting a putt from decent distance, he knew it was good, walked it in and raised his putter in style just like his dad.

Fourth hole in and the putter raise comes out!

Charlie Woods is feeling it. pic.twitter.com/dykynVhfVQ

On the next hole, during a little mid-round practice session, Charlie took it up a notch and sunk another putt with some serious swagger.

Just practicing, but still a competition.

Team Woods finished the day tied for 10th at nine-under but not without an exclamation point on the back nine.

For three birdies in a row …

Team Woods is 9-under thru 15. pic.twitter.com/bv8jubMHRy

Charlie and Tiger will try to move back up the leaderboard with a big round on Sunday. Regardless of the result, just watching the two of them on the course is a delight.