How Much Money Would You Drop To Caddie For Tiger Woods, Because One Guy Just Paid $75,000 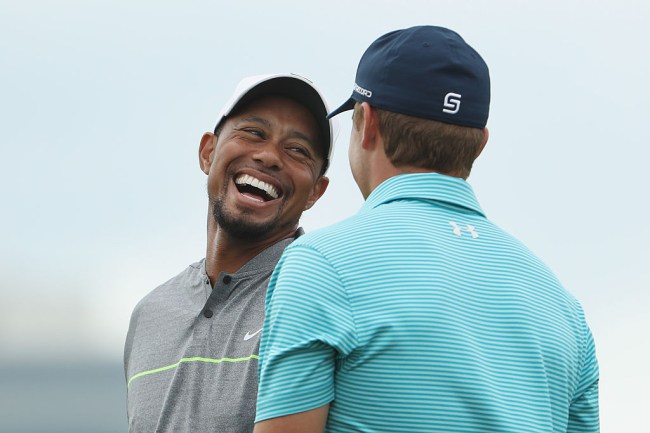 How much money would you pay to play a round with Tiger Woods? That’s a common question any Tiger fan and their golfing buddies have thrown around over the years. But what if you didn’t get to play a round with him, but instead you’d get to carry his bag for him during a Wednesday Pro-Am? Yeah, I think those two questions have very, very different answers.

Well, the founder and CEO of National Funding, Dave Gilbert, dropped a cool $75,000 over the weekend to carry Mr. Woods’ bag during the Pro-Am of the Hero World Challenge on December 3.

The $75,000 bid benefits Tiger’s TGR Foundation which was founded by Woods and his late father back in 1996. The community-based program develops resources to help with the schooling of underserved children around the country.

So no, Tiger didn’t have a little get together over Memorial Day weekend and hold an open auction with some wealthy friends to see who would pay the most to caddie for him. In fact, this all went down in Las Vegas at Woods’ annual Tiger Jam which also featured a charitable poker game where Russell Westbrook beat Woods.

The cheapest ‘package’ to get in the door at Tiger Jam started at $3,000 working all the way up to a $30,000 ultimate golf package. I’m just going to go ahead and say I bet the Tiger Jam is not not fun.

Hats off to Tiger for doing all the charitable work with his foundation over the past 23 years and counting.

Now with this news, we can’t sit here and act like we haven’t thought about the question of what people would pay to caddie for him in a Pro-Am if the money was just going straight into Woods’ pocked.

It would be absolutely NUTS to pay anywhere close to $75,000 to caddie for Tiger in a pro-am if the money wasn’t going to a great cause. If you didn’t know, Pro-Ams are not fun. They take place every Wednesday before regular PGA Tour events and it’s usually one or two professionals playing alongside two or three non-professionals, as in very wealthy folks who more often than not aren’t any good. You’d be looking at a very long day while carrying Woods’ bag and your bank account looking a bit lighter.

Tiger is back in action this week at the Memorial Tournament in Ohio where he has won the event five times.