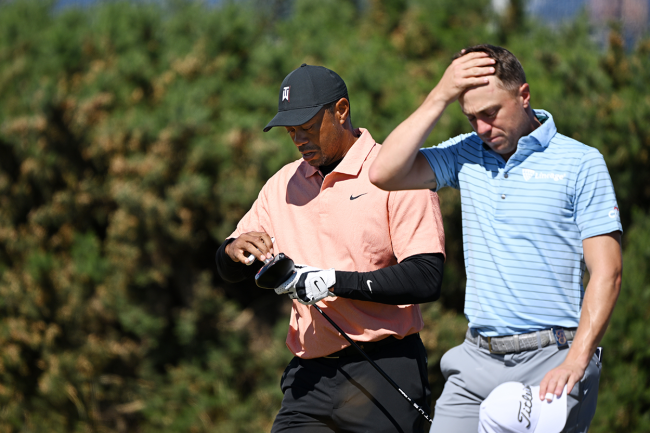 Tiger Woods is still the greatest golfer of all-time and he isn’t going to let people forget anytime soon. Not even his good friend Justin Thomas.

With the 150th Open Championship set to get underway from St. Andrews this weekend, Woods and Thomas took to the old course twice over the weekend. It was the first time that Woods had played an 18-hole practice round prior to a Major after his remarkable return from his car accident, and details from the Sunday outing were ‘encouraging.’

Though Thomas may be in better form these days, considering that Woods is still rehabbing and dealing with the struggles presented to him by his reconstructed leg, but the latter didn’t let the former forget who runs things at the legendary Scottish course. He does.

The duo of generational talents, who are close friends off of the course, were both mic’d up for Sunday’s practice round. An incredible behind-the-scenes video from the afternoon provides an incredible look at the two getting after it.

Much of the afternoon was spent with some playful quips, conversation about what to do in each situation, what clubs to have in the bag, and how they were feeling about the course and the weekend. The video brings the viewer along with the round and it’s really cool, take a look:

At the end of the round, Woods got in a vicious jab at Thomas. It was all in good fun, of course.

On Monday evening, the former Open Championship winners will gather for a past champions dinner. Woods joked after the 18 holes on Sunday that he would see Thomas there. But Thomas has never won and Woods quickly retracted his statement with a big smile.

“See you tomorrow for the past winners event…oh I forgot you’ve never won here.”

Absolutely savage. Woods never misses an opportunity to establish his greatness, even with his good friend, who is one of the best golfers in the world right now.