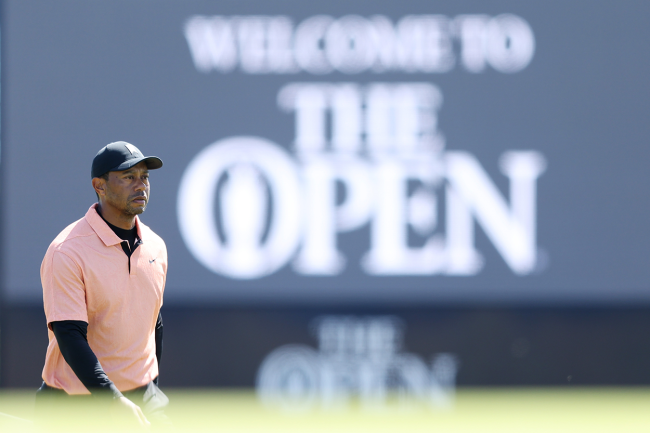 Tiger Woods had not played a full, 18-hole practice round before a Major prior to Sunday. On Sunday, he and his good friend Justin Thomas took to the course at the Old Course at St. Andrews prior to The Open Championship and it was reportedly “encouraging.”

According to Mark Schlabach of ESPN, Woods had third birdies on the day. He drove the green on 18, left an eagle putt short and tapped in for birdie.

On the 18th @TigerWoods drives the green. pic.twitter.com/bEBrofIkJB

He also birdied the par-4 seventh hole and the par-3 eighth hole after sticking his tee shot to about five feet.

Woods’ 18-hole practice round on Sunday comes five days before the start of the 150th Open Championship. He and Thomas also walked 18 holes on Saturday night, but didn’t play the full round— just chipping and putting along the way. That is 36 holes in less than 19 hours.

As for Sunday’s round, it was Tiger’s first full practice round before a major championship since returning from his car accident. He played nine-hole practice rounds prior to The Masters in April and the PGA Championship in May to preserve his energy and strength.

Joe LaCava, Woods’ caddie, spoke with ESPN after the 18-hole day on Sunday and said that it was not his best to start, but that he started to get going throughout the day.

“He was struggling early, but came on as the day went on,” LaCava told ESPN. “That’s encouraging.”

The par-4 17th hole at St. Andrews, known as ‘The Road Hole’ is famously difficult.

Per Schlabach’s report on the practice round, Woods played it pretty well and saved par.

“Thomas hit his tee shot high and right toward the Old Course Hotel.

“Woods took the same aggressive line as Thomas on his tee shot, aiming over the roof of the former railway shed down the right side. Woods’ tee shot ended up in the fairway, but then he hit his approach shot into a cavernous bunker to the left of the green. He chipped out to about 2 feet to save par.”

At 46 years old, Woods’ comeback has been remarkable. For him to be playing at all is impressive.

Tiger is in town. pic.twitter.com/PKaeL2iL2j

However, after finishing 47th at The Masters, withdrawing from the PGA Championship because of pain, and skipping the U.S. Open, Woods will hope to play better this weekend. St. Andrews is no easy task, but it sounds like the Big Cat is doing everything he can to play at full strength and play well.