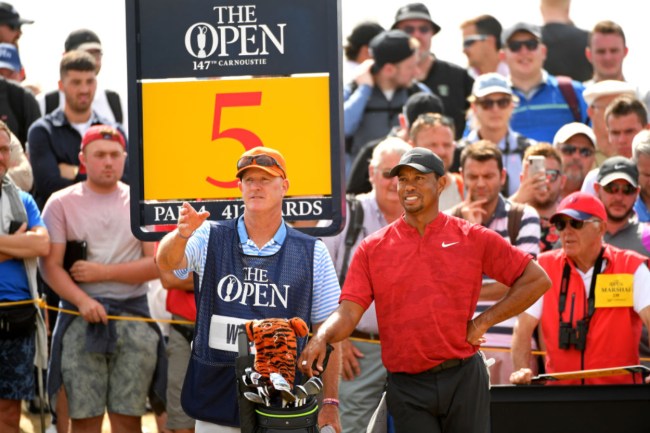 Nobody knows when, if ever, we’ll see Tiger Woods ever compete on the PGA Tour or at a major championship ever again. Despite that fact, one golf analyst is already contemplating when and where Woods may announce his retirement from the game.

Woods, like every other golfer with a pulse, loves the Old Course at St. Andrews. He’s hoisted the Claret Jug on those hollowed grounds twice in his career and explained that he “would love to play” in the Open at St. Andrews this year, which will be the 150th anniversary of the tournament.

With it being a historical occasion at the most historic golf course on the planet it got Sky Sports golf analyst Simon Holmes to thinking.

During the final round broadcast of last week’s Sentry Tournament of Champions, Holmes suggested Woods may retire at The Open this year.

“I really hope it doesn’t happen, but it’s something I think that could happen.”

“Jack and Arnie did the same thing on the Swilken Bridge when they played in their last major,” Holmes said, according to Golf WRX, ”and I could just see Tiger thinking it would be a nice way to go out.”

Sure, it would be a nice way for Tiger to go out, but it’s still a very odd suggestion and rumor from Holmes.

Again, we don’t know if or when Woods will ever play competitive golf again. There’s no denying he has his sights set on a return to competitive play, and I believe we’ll absolutely see it happen, but talking about Woods retiring before he attempts that come back is an odd thing to speculate about on a national broadcast.

Woods’ good friend and PGA Tour winner John Cook seems to think we’ll have to wait another full year before we see the big cat tee it up again.

Would it be incredible to see Woods win The Open at St. Andrews later this year and then ride off into the sunset? Yes. Is there anything at all right now pointing to Woods even playing in the tournament? No, unfortunately.