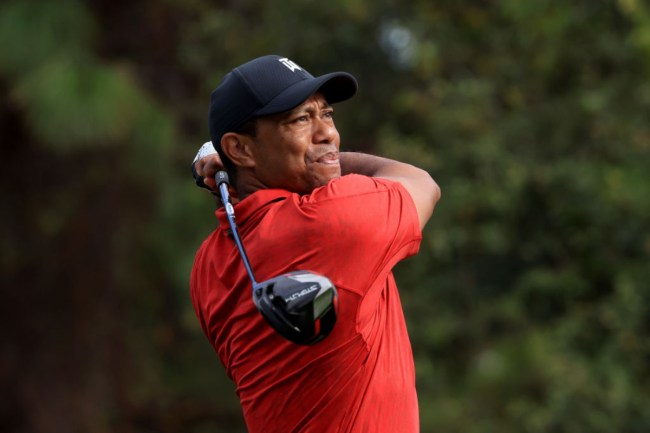 Back in December, the golf world was treated to watching Tiger Woods play golf, and it was an added bonus he did so alongside his son, Charlie, at the PNC Championship.

While Team Woods’ runner-up finish at the PNC Championship wasn’t of course an actual PGA Tour event, it elevated expectations of him making a return to the competitive scene to ridiculous levels.

Prior to the PNC Championship, Woods made it very clear that he would never play full-time on the PGA Tour again, but that it was “realistic” that he could make a comeback at some point.

Many just assumed that said comeback could come much sooner rather than later, perhaps even at this April’s Masters, after seeing him get around the PNC.

According to longtime friend and former PGA Tour winner John Cook, however, those expectations need to be tempered, big time.

“I don’t see it in the next 12 months,” Cook told Golf Channel. “I think next time we see him will be [at the PNC Championship] next year [in 2022]. I don’t think his body will be physically ready. He can’t train the way he’s going to want to train.”

Tiger Has His Sights Set On A Return, Eventually

Having said that, Cook made it clear that Woods absolutely has his sights set on a return.

“I see it happening at some point otherwise he wouldn’t be testing a ball, shaping shots on the practice tee, working on a new driver that he likes. I think there’s a motive to that.”

We’re all hopeful and ready to see Woods back on Tour and competing in major championships again, but we also need to remember that Woods is lucky to still be alive after his single-car crash a year ago. He’s also fortunate that he didn’t have his right leg amputated following the accident.

The fact that yet another Woods comeback is even on the table is incredible.

While waiting another full year for Woods to return to competitive action sounds like forever, odds are if that return happens, it’ll be well worth the wait.