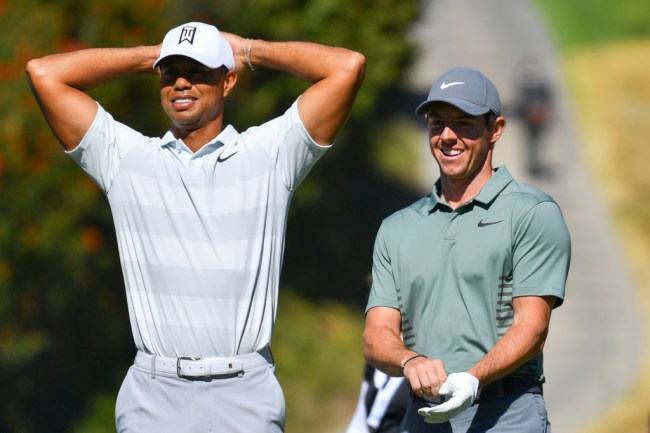 It’s not too often that we see some sort of highlight during pro-am rounds on the PGA Tour, but back in February at the Genesis Invitational Rory McIlroy and Tiger Woods teamed up for one of the great golf videos of the year.

McIlroy’s group was playing behind Woods’ that Wednesday and on the Par 5 17th the big cat decided to have some fun with McIlroy and tend the flag.

On the latest episode of The Rory & Carson Podcast, McIlroy, for the first time, offered up the story about the situation. The world No. 1 explained that he even felt a little bit of pressure to hit a good shot, which makes sense seeing as how the greatest golfer of all-time was tending the flag while he was nearly 200 yards out.

“He was sort of messing around and saw that I was waiting in the fairway so he tended the flagstick for me from 190. It gave me this incentive that I really wanted to hit a good shot here – a little under pressure – and I hit a 6-iron and he actually had to move his left foot out of the way of the golf ball.

“I don’t care what happens this week, that is the best moment. I was so happy.”

Thanks for hanging back to tend the pin, @TigerWoods. Almost needed you.😉 https://t.co/zPxLlgBtyu

Woods’ reaction to McIlroy stiffing the approach was classic as well.

McIlroy ended up hitting plenty of other great shots that week picking up a T-5 finish at 8-under, but you can’t blame him for cherishing that moment with Woods tending the flag.