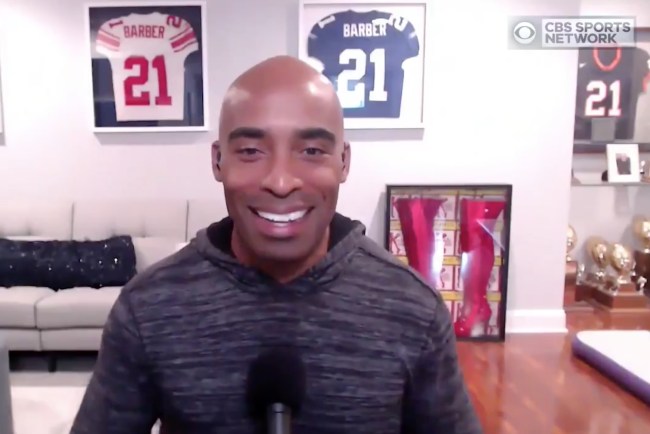 Former New York Giants running back Tiki Barber was a 3x Pro Bowler and is a member of the coveted ‘New York Giants Ring of Honor’. He rushed for 55 TDs (10,449 yards) and caught another 12 TDs for the Giants between 1996 and 2006. He knows a thing or two about what it takes to be a successful running back for the NY Giants and he immediately found a second career in broadcasting where he gets paid to discuss exactly that.

On his CBS Radio show Tiki & Tierney with co-host Brandon Tierney, Tiki put Saquon Barkley on blast. Saquon is currently the face of the New York Giants franchise now that Eli Manning has retired. He was the Giants #2 draft pick in 2018 and ran for 1,300+ yards in his rookie season which was good enough for the Pro Bowl that year.

Saquon already has 17 TDs on the ground and 6 more in the air but that’s not what concerns Tiki Barber. The way Tiki sees it, Saquon might not be an every down back because he cannot pass protect. Here’s the clip:

Tiki Barber: “Saquon Barkley, he might not be an every down back. He cannot pass protect… If you’ve watched him… he doesn’t want to block… He doesn't want to hit anybody. He's a great back but he's frustrating to watch trying to pass protect" #Giants pic.twitter.com/fTRKJqly2C

If that tweet isn’t loading for you, here’s the text: T“Saquon Barkley, he might not be an every down back. He cannot pass protect… If you’ve watched him… he doesn’t want to block… He doesn’t want to hit anybody. He’s a great back but he’s frustrating to watch trying to pass protect”

For a former Giants RB and member of their Ring of Honor to speak out like this on the team’s current superstar is certainly something that fans will take notice of. He’s no stranger to talking about the problems of Giants players but this seems to have caught more attention than usual. Interestingly, A LOT more fans agree with Tiki’s statement than disagree.

The Tiki man may be right.

He’s spot on. Both of them spot on. I hope it lights a fire under Saquon’s butt because we know he has it in him.

Hate to say it, because he is right….can’t stand Tiki

Tiki is one of my least favorite if not least favorite Giants player ever. This is all about speaking the cold hard truth. We could’ve had a HOF LG in big Q but we got a RB who dances around behind the line of scrimmage partly because of Gettleman’s incompetence to build O line.

Doesn’t want to hit anybody? He makes it sound like he is afraid of contact. That’s a bad take. It’s a technique and awareness problem. Lol seriously didn’t even know Tiki had a radio show. https://t.co/FUNuoMeucT

Finally someone said it https://t.co/QptjEI2pfj

People just don't like Tiki but he's not lying. https://t.co/rkB5wXGqUm

There are A LOT of fans who think Tiki Barber is just running his mouth and don’t want to actually think about the substance of his statement.

There’s no denying that Saquon Barkley is one of the best running backs in the NFL. He is. That’s a fact. But I think the point here is he (and everyone) can improve in some meaningful way and Tiki’s exposing one of the major problems plaguing the New York Giants right now, but that’s not how Tiki’s criticism is being received.