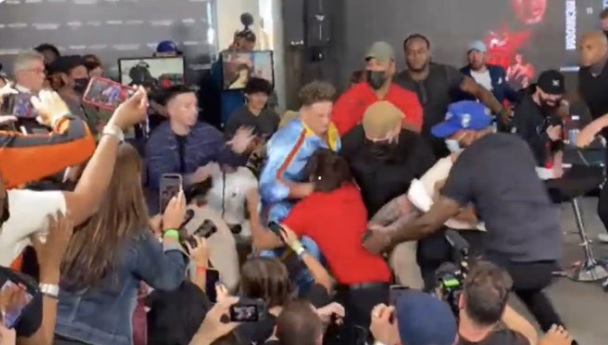 Famous TikToker Bryce Hall is having a pretty horrendous month as he’s set to take on Youtuber Austin McBroom on the Social Gloves fight card on June 12th.

Just a few weeks ago, Hall absolutely lost his mind when he saw his ex-girlfriend ” rel=”noopener” target=”_blank”>Addison Rae hanging out with Jack Harlow at the Jake Paul-Ben Askren fight.

Over the weekend, Hall was then forced to watch Rae make out with another dude on TV during the MTV Movie And TV Awards.

TODAY IN SHADE: Bryce Hall appears to respond to his ex Addison Rae making out on live television with Tanner Buchanan. Bryce says “suck, but moving on.” pic.twitter.com/8qt7oqnN14

On Tuesday, Hall made his way to LA to attend the Social Gloves press conference for next month’s TikTok vs Youtube boxing match.

During the press, Hall got into a physical altercation with his opponent Austin McBroom and he ended up getting the worst of it.

Brawl breaks out between Austin Mcbroom and Bryce Hall at the YouTubers vs TikTokers press conference. pic.twitter.com/vqkG7lXRwk

Bryce Hall is having a rough month, lost his girl Addison Rae to Jack Harlow and is now getting manhandled by a Youtuber at a press conference. Pain (via @livexlive @socialgloves)

Yikes. Hall and McBroom set to fight on June 12th at the Hardrock Stadium in Miami which will air live on PPV on LiveXLive.

If you’re in Miami in June, i wanna see you here: https://t.co/O1LGfSRCO7 pic.twitter.com/aZtdGjuqHO