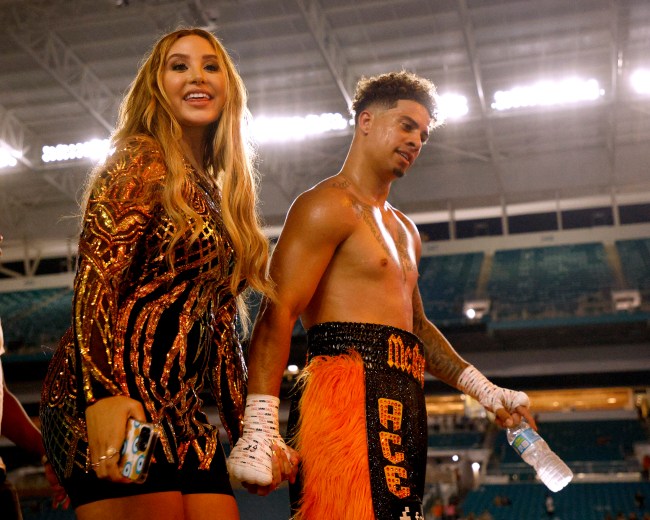 Youtuber Austin McBroom, who is famous for making videos with his wife Catherine, is getting putting on blast after he made his boxing debut.

On Saturday night, McBroom went viral after knocking out TikToker Bryce Hall at the Social Gloves: Battle of the Platforms event in Miami, Florida.

Hours before the fight, a woman named Monica Bush AKA MoniManey, who has over 200k TikTok followers, went on the social media site to claim McBroom cheated on his wife with her.

The TikToker alleges that after Austin McBroom allegedly took her to a home in Malibu, they ran into fans who took pictures of them in Austin’s car. pic.twitter.com/CHNjBsluiy

TikToker alleges that Austin McBroom allegedly told her that he and Catherine are allegedly only together for publicity. TikToker then alleges she allegedly slept with Austin. pic.twitter.com/JZO3JiUkWx

In the videos the TikToker went on to share several alleged texts from McBroom that she says confirms his cheating.

The TikToker shared screenshots of alleged texts and DMs between themselves and Austin McBroom. pic.twitter.com/GWq8TmGWYO

More alleged texts between the TikToker and Austin McBroom. At one point Austin allegedly appears to reference their sex saying “it must of been bad for u” pic.twitter.com/37QTs3PRn8