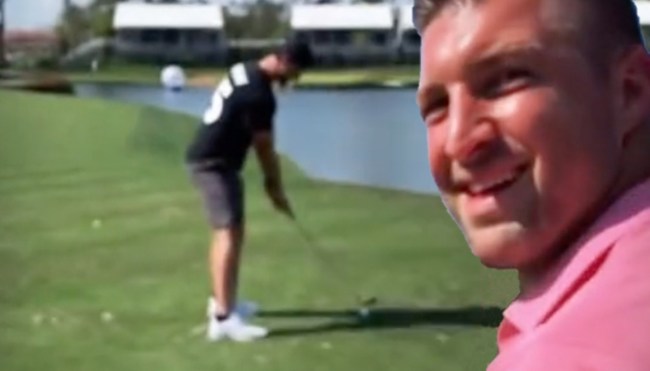 There are a number of golf courses around the world that are home to some particularly iconic holes that simultaneously strike awe and fear into the heart of basically every player, like those located on the “Cliffs of Doom” at Pebble Beach and the one at St. Andrews with a tee box in the shadow of a hotel you need to take care to avoid on your first shot.

Of course, you can’t talk about that group without mentioning the 17th at TPC Sawgrass, an island hole surrounded by water that has claimed countless balls and absolutely derailed the rounds of some particularly unfortunate PGA pros.

When you consider the 17th has victimized some of the most talented players on the planet, a more casual golfer could be forgiven for not sticking their shot on the green the first (or second, or third) time they attempt to hit it.

As a result, you have to give some major props to Jaden Barr, who recently posted a TikTok of the time Tim Tebow plucked him out of the crowd to try his luck during a charity tournament at TPC Sawgrass.

In the video, the former NFL quarterback pledges to throw Barr (who plays QB at a DII school) in the water if he manages to put his show on the green and subsequently followed through on his promise by “baptizing” him after he managed to do exactly that.

That time I got baptized by Tebow #golf #tpcsawgrass #fyp