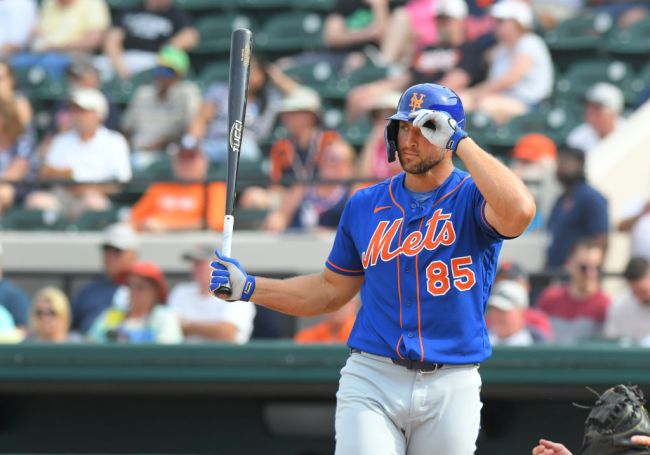 The former Florida Gators quarterback has had one of the most spell-binding careers in MiLB history that never amounted to a big league opportunity. He played 16 games in the NFL before signing with the New York Mets organization in 2016 and saw 1,119 plate appearances over 306 games in the minors.

Tim Tebow has retired from professional baseball. His legacy is tremendous: pic.twitter.com/RZiz9qzNYq

Tebow, 33, was included on the team’s list of spring training invitees over the weekend, but has declined the opportunity, choosing to focus on his broadcasting career.

After losing the third-string quarterback battle to Matt Barkley and being released from the Eagles in August of 2015, Tebow participated in the Mets’ instructional league in Port St. Lucie the fall of 2016. He had played baseball growing up and could have been drafted in Rounds 7 to 12 out of high school and could have been drafted as early as the second round if he played at the University of Florida and kept up his production. As a junior in high school, Tebow hit .494 with four home runs, 30 RBIs and 10 doubles as an all-state player in Florida. For those who don’t know, an all-state player in the state of Florida is really, really good.

When he got to Port St. Lucie, a coastal city in the middle of Orlando and Miami, he homered in his first in-game at-bat.

Tebow started his first regular season with the Low-A Columbia Fireflies and again went deep in his first at-bat.

Later in the year, when he got moved up to High-A St. Lucie, he didn’t send one over the fence in his first at-bat. He did in his second.

It didn't take Tim Tebow long to get his first home run since his promotion to high-A ball. pic.twitter.com/nuE9jNZ0vw

At one point during the Advanced A season, No. 15 had a 12-game hitting streak and hit his first walk-off moonshot. Not bad, especially for the Mets organization which was selling minor league tickets like crazy.

Tebow was invited to spring training (for the show) the next spring and called up to AA ball for the regular season. He struggled in camp but slapped another tater in his first at-bat with the Binghampton Rumble Ponies. It was a ridiculous string of first days.

To make things even more unique, Tebow played for Team Philippines in the World Baseball Classic. He was born there while his parents were baptist missionaries in 1987 and was eligible to suit up for the country. Only Tebow.

2019 was his last professional season and he appeared in 77 games for the team’s AAA affiliate, the Syracuse Mets, before a laceration on his left hand ended his year — and ultimately his career — early. Tebow batted .223/.299/.338 with 107 runs scored, 48 doubles, three triples, 18 home runs, 107 RBIs and five stolen bases over 287 games. It wasn’t an overly impressive line, but he was a very solid player with all things considered.

Tebow participated in spring training again in 2020, and the MiLB season was cancelled due to COVID-19 not long thereafter. No matter how much the Mets wanted him to be for marketability sake, he was not quite a major league player. Especially not during a pandemic year.

There were some really funny moments.

Tim Tebow has announced his retirement from baseball. ⚾️

Tim Tebow is a heck of a good dude and honestly did better in the minors than I thought he would, but…… This is the moment I'll always remember him for as a baseball player. pic.twitter.com/bMDZ9LYIfa

He didn’t care though. When he was asked about all those who criticism him, he replied with a classic Tebow response.

Tim Tebow’s speech at spring training in 2019 is powerful and is worth listening to again. Such a great message. pic.twitter.com/bEzOYkJ93h

It was a short, strange career that I didn’t appreciate for myself in the moment. What a wild life that Tebow has lived. Remember when he won an NFL playoff game?