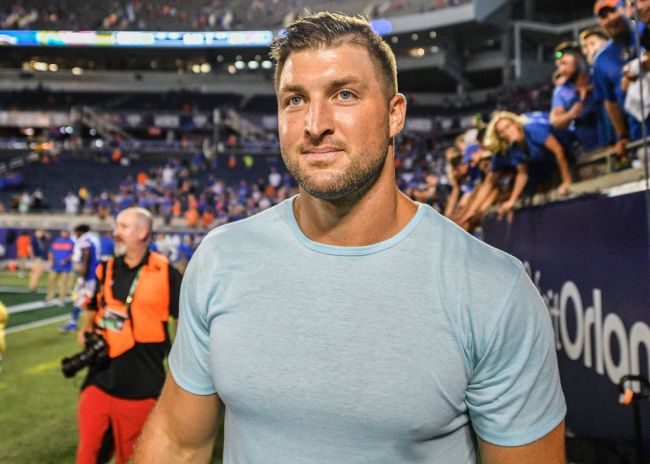 It’s become abundantly clear that Tim Tebow is having a tough time hanging up the cleats, whether they be baseball cleats or football cleats, the 33-year-old can’t just be a sports analyst and speaker. After a stint as a baseball player in the Mets’ system, the former Broncos quarterback is seriously considering a return to the NFL, and the Jaguars seem more than interested in giving him a legitimate shot.

Tebow, who hasn’t played in the NFL since 2012, recently worked out for the Jaguars as a tight end. Practically every football fan, analyst, and coach have suggested at one point or another for Tebow to try his hand at the tight end positions, and now that it’s obvious that could be the only position he could possibly play at the professional level he seems to be on board with it.

Having an unofficial workout with the Jags is one thing, some could say it’s just a publicity stunt or Urban Meyer paying back his former Florida quarterback, but this whole idea of Tebow being a tight end on Jacksonville’s roster seems to have some very real steam behind it.

Jaguars co-owner Tony Khan recently joined ‘Jags Talk‘ and said that “Tim’s got a great history of winning and Urban really believes he can help us.”

NBC Sports insider Peter King says that he’s heard that the Jags could sign Tebow to compete for a spot at tight end following rookie mini-camp.

“I hear the Jags signing Tebow and giving him a shot to be a backup tight end could happen, according to King. “I hear the Jaguars will wait till after this weekend’s rookie mini-camp to assess their roster and maybe see how much they think they can get in the overall blocking/receiving from fifth-round tight end Luke Farrell of Ohio State. (I think they’ll be pleased with him.) But after declining to keep solid vet Tyler Eifert last week, the Jags have a major need at tight end. Which could give Tebow fan Urban Meyer a pretty good reason to bring in Tebow for a shot to be roster insurance.”

If you’re the Jaguars, signing Tebow to the roster does nothing but bring more hype to a team that’s already got quite a bit of excitement around it with Trevor Lawrence coming in and Meyer taking over the team. The state of Florida will collectively lose its mind if Tebow does get signed and makes the Jacksonville roster.

UPDATE: According to Ian Rapoport, the Jags are set to sign Tebow to a one-year deal.

The #Jaguars are planning to sign QB-turned-TE Tim Tebow to a 1-year deal, per me and @TomPelissero, a deal that could be official in the next week or so. Nothing done yet. But he’ll have a chance to make the team to reunite with his mentor and college head coach Urban Meyer.