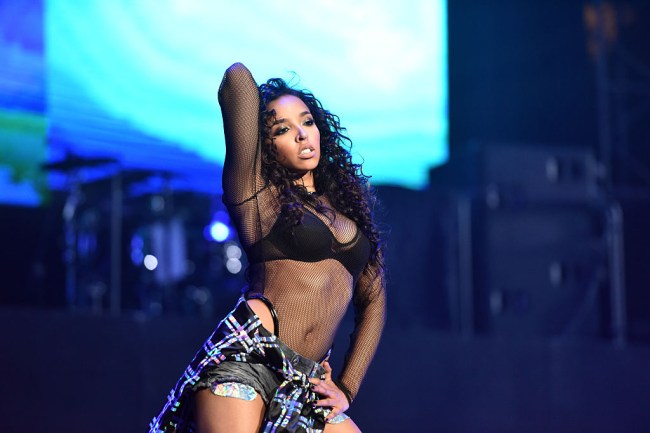 Tinashe admitted that she drank for six straight months after she found out that her ex-boyfriend Ben Simmons was dating Kendall Jenner. Maybe we all have been dumped by Ben Simmons and were envious of his new relationship with Kendall Jenner and that explains our months of imbibing in alcohol.

The Roc Nation brunch happened over the weekend, which is a music celebration before the Grammy’s. Maybe singer Tinashe had a few too many mimosas because she opened up about what happened when her ex-boyfriend started dating Kendall Jenner.

Tinashe and Simmons dated for about six months, but the relationship crumbled, and the couple broke up in May of 2018. There were rumors that Simmons quickly moved on to Kendall Jenner weeks after the breakup.

On Saturday at the Roc Nation brunch, Tinashe revealed what it was like when she found out that Simmons was dating one of the Kardashians. “It may have been the worst day of my life, but it’s okay,” Tinashe said.

“I drank for like six months after that! Are you kidding me? I was like wasted for months,” Tinashe revealed. “But I’m okay now. It was terrible. It was bad. Like it was bad, but I’m good now.”

Tinashe found about her ex moving on to a new woman “from reading a headline.” The 26-year-old All Hands on Deck singer said “it’s not normal” to find out about your ex’s new love like that. She admitted that she was “really depressed.”

Tinashe said her mother and her friends helped her get through her dark times.

“You’ll find out in real time. It goes live real. I think it’s important to always have people that got your back, but at the same time you can’t really ever take it too seriously,” Tinashe said. “At the same time you’ve got to keep moving forward and through it. This year is such a big year in terms of like what I want to do. Just like even trying to give that energy is like I can’t. I can’t go there.”

Tinashe had better put a lock on her bar because there are new rumors that her former boyfriend is back with Kendall.

Kendall and the 6′ 10″ point guard for the Phialdelphia 76ers broke up in 2018, but they have been spotted together recently, including on New Year’s Eve.

Page Six sources claim to have spotted the couple at the Little Sister Lounge in the East Village last week. Simmons was in town as the 76ers played the New York Knicks at Madison Square Garden. “They seemed together as a couple,” the source said. They left together at 2 a.m., according to the spy. Jenner was also seen at a Sixers home game in December. RIP Tinashe’s liver.