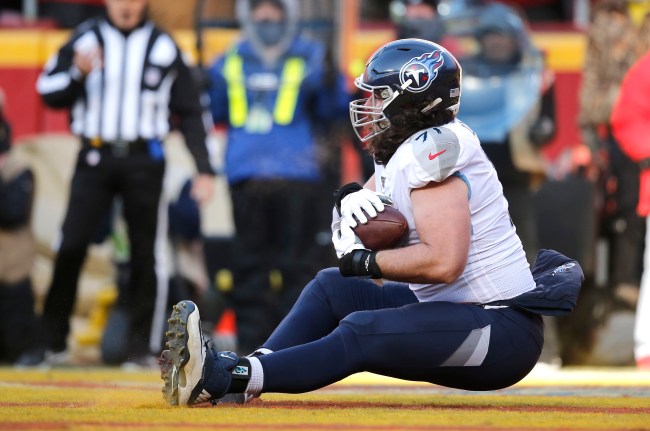 In the second quarter of today’s AFC championship game, the 321 pound lineman caught a touchdown pass from Ryan Tannehill.

Dennis Kelly becomes the heaviest player (321 lbs) to catch a TD in the playoffs. pic.twitter.com/ZdEklKHK7m

At 321 pounds, Titans OT Dennis Kelly is the heaviest player in NFL history to catch a playoff touchdown.

Dennis Kelly is the third OL in Conference Championship history to score a receiving TD.

Interestingly, both of the first two happened on the same day, in 2015 pic.twitter.com/0LmzZ2x1FA

#Titans tackle Dennis Kelly is the only offensive lineman since 2000 with 2 receiving TD in a season.

He’s the third player to weigh 300+ pounds over that span to do so. The others are Ravens FB/DL Patrick Ricard & HOF DT Warren Sapp.@Titans