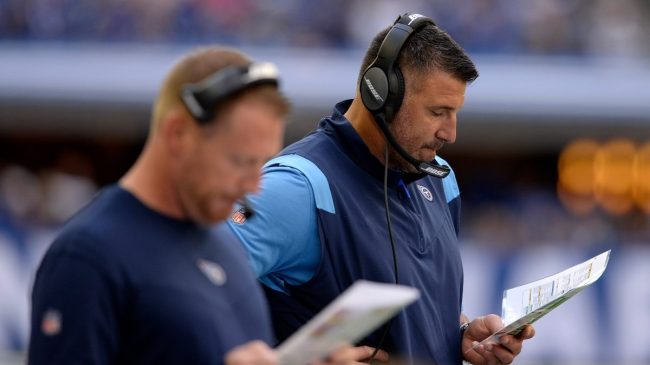 The Tennessee Titans’ offense was rolling against the Green Bay Packers. However, after the plane ride home, offensive coordinator Todd Downing was in custody with a DUI charge. Now, head coach Mike Vrabel finally breaks silence about the situation.

According to Mike Giardi, Vrabel claims the club will “continue to move forward with Todd downing as their offensive coordinator.” Even so, the Titans head coach isn’t ruling out a possible change at offensive coordinator down the road, “pending the legal process and the NFL’s decision.”

Mike Vrabel says the #Titans will continue to move forward with Todd Downing as their offensive coordinator but does say that could change pending the legal process and the NFL’s decision.

This isn’t the best look for Tennessee but the team isn’t going to make a drastic change with the coaching staff right now. Todd Downing’s DUI charge is a dark mark on the franchise’s season. So for that reason, a potential fire in the future could still be in play. Here is a quick clip of Mike Vrabel speaking about the situation, per Turron Davenport.

On top of that, it’s not like Todd Downing is a great offensive coordinator either. The Titans have largely struggled on offense thanks to his questionable playcalling. Somehow the team is 7-3 on the year even with Downing’s incompetence.

We’ll see where it goes, but it sounds like the Titans’ head coach will let Todd Downing finish the season as the offensive coordinator. That’s unless the NFL steps in and makes a quick decision on the matter. Until then, look for Mike Vrabel to do everything possible to keep his team focused on the season.