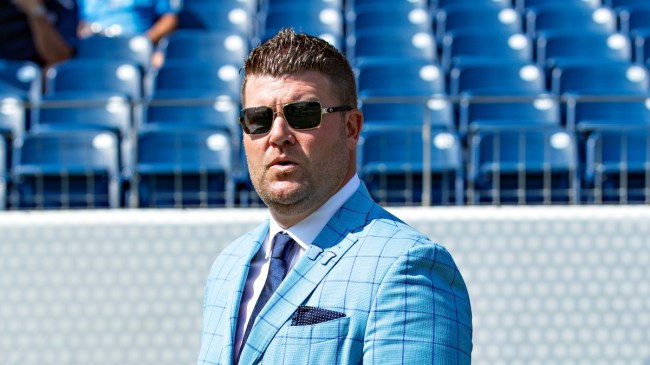 The Tennessee Titans came out of nowhere on Tuesday in firing general manager Jon Robinson. Considering the team is likely making the playoffs and has had a winning season since he took the job, many were stunned by the move.

However, it sounds like we finally know the exact reason the Titans’ controlling owner Amy Adams-Strunk made the decision.

Jack Gentry of A to Z Sports shares a clip of Adam Schefter breaking down the situation. According to Schefter, the Titans’ owner felt out of the loop on certain decisions and “was not happy, not entirely happy, about not being included in a lot of conversations.”

“I think the owner was not happy, not entirely happy, about not being included in a lot of conversations.”

So, there you have it. The Titans’ controlling owner felt she wasn’t being included in conversations. Additionally, she clearly wasn’t a fan of the direction the roster was going.

The Titans of course traded AJ Brown away to the Philadelphia Eagles on draft night, which came as a shock to fans everywhere. On Sunday, Brown went absolutely bonkers against his former team. Although that’s the case, it’s hard to imagine that was what led to Tennessee firing Robinson. Even so, it certainly didn’t help the situation.

Jon Robinson is credited for helping pull Tennessee out of the gutter, he just couldn’t make the right decisions to get the franchise over the hump. So with that, the Titans are officially searching for a new general manager.