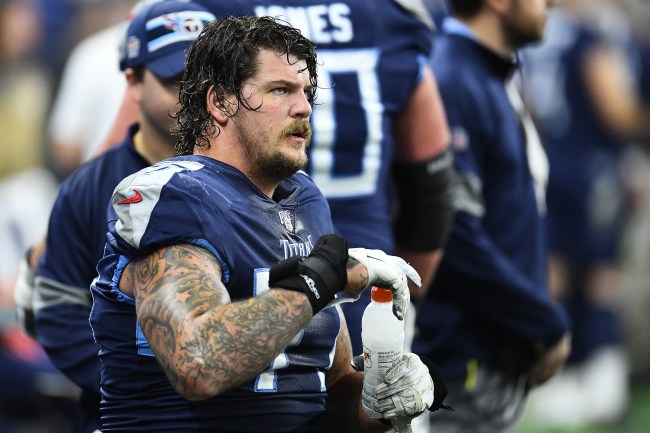 Before the two teams played each other on Saturday night, Tom Brady released an absurd hype video called “It’s too late to be scared,” that featured clips of lions along with footage of the Patriots’ game highlights while a voice-over by Christopher Walken from his monologue in the movie “Poolhall Junkies,” ran in the background.

It’s too late to be scared. pic.twitter.com/Yv6GRDrqtR

After the Patriots lost the game, Titans offensive lineman Taylor Lewan edited Brady’s video to include highlights of the Titans beating down the Patriots with the caption “You wanted hyenas you got fucking hyenas. #ForTheBoys! #NoBadDays”.

Taylor Lewan just put this on his Instagram 😂😂😂 pic.twitter.com/mk7dDIfzJ6

Apparently Brady’s hype video really annoyed the Titans players and they used it as bulletin board material.

Tom Brady’s hype video clearly pissed off the Titans locker room. Multiple players mentioned “hyenas” including DB LeShaun Sims, who shouted, “he one of the hyenas!” over Logan Ryan, who was in the middle of saying Kyle Van Noy needs to shut up with his revenge tour and play ball

“They wanted hyenas, they got hyenas!” …Titans players and coach Mike Vrabel yelling as they enter the locker room, referencing Tom Brady’s pregame hype video. “We want more,” Derrick Henry yelling as the last one in.