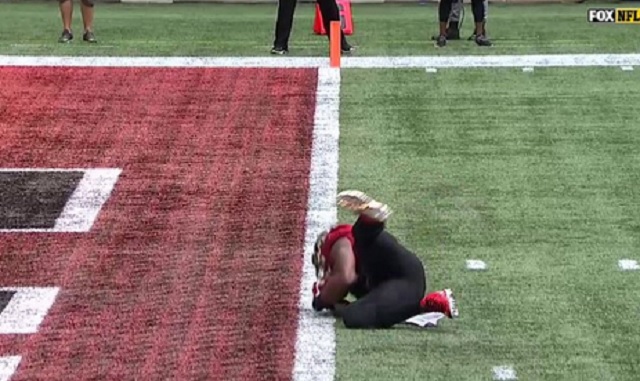 All Todd Gurley had to do was stop at the one-yard line and not score a touchdown for the Falcons to probably win their game against the Lions.

With the Falcons just needing to run out the clock and hit a chip-shot field goal to win the game, Gurley was handed the ball with about a minute left in the fourth quarter and the Lions defense allowed him to score. When Gurley realized what the Lions were doing he tried to stop before scoring but his momentum carried him into the end zone.

Falcons wanted to run the clock down on the Lions pic.twitter.com/JjkkNwobvd

Gurley’s touchdown allowed the Lions to have enough time to march down the field to score a touchdown to win the game.

Gurley was immediately mocked by NFL fans for his “accidental” TD.

I’ve never been more sure of anything than I was that the Falcons were gonna lose the game after that Gurley TD.

in 2018, Todd Gurley ***twice*** stopped short of the end zone instead of scoring touchdowns to preserve clock in Rams wins…

of all the guys in the NFL to screw that up… stunning that it would be him pic.twitter.com/YxqNmCO03N

Todd Gurley is not happy after the Falcons blew a late lead to the Lions. pic.twitter.com/kbFOjJu2x0

All Todd Gurley had to do was pic.twitter.com/3g1Ir2cuTI

Arthur Blank : Maybe that will fix it