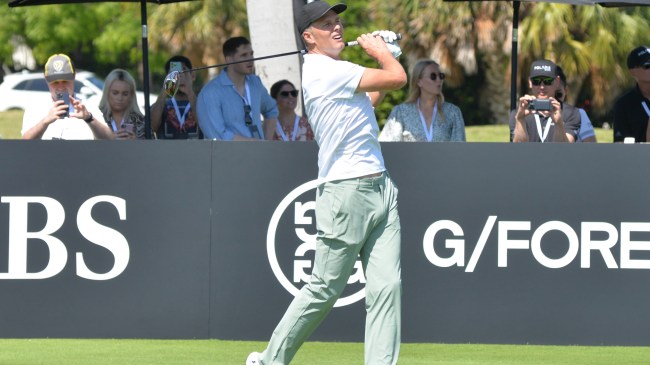 Tom Brady and Aaron Rodgers will face off against Josh Allen and Patrick Mahomes in an upcoming charity golf event, The Match.

The two NFC superstars will take on a pair of young guns from the AFC for bragging rights on the golf course. And from the sound of it, the two seasoned vets aren’t too worried about their competition.

Brady and Rodgers made an appearance on TNT to speak with Ernie Johnson, Charles Barkley, Shaq, and Kenny Smith about the upcoming event. They had some less than spectacular things to say about Allen and Mahomes’s skills.

Brady and Rodgers were asked how they plan on “teaching the young bucks a lesson on the golf course.” The response was pure disrespect.

Here’s what Aaron Rodgers had to say:

“I look forward to showing these young guys a little something on the course… I’ve done my scouting report and I heard that Josh was terrible at Pebble [Beach]. Pat has played the last couple years in Tahoe and hasn’t broken 80 yet. I think he was closer to being in a group with you, no offense Charles, than with me and Tom.”

Comparing your golf skills to Charles Barkley is never a compliment, though he has improved his swing over the last few years.

Rodgers went further to say he’s not even practicing for the event, he’s just going to “trust his instincts.” He says that Allen and Mahomes can’t hold a candle to him and Brady on the golf course. That could add a little fuel to the fire for the two young guns.

We’ll see if Brady and Rodgers can back the trash talk up next week. The event tees off on June 1 at 6:30 PM.