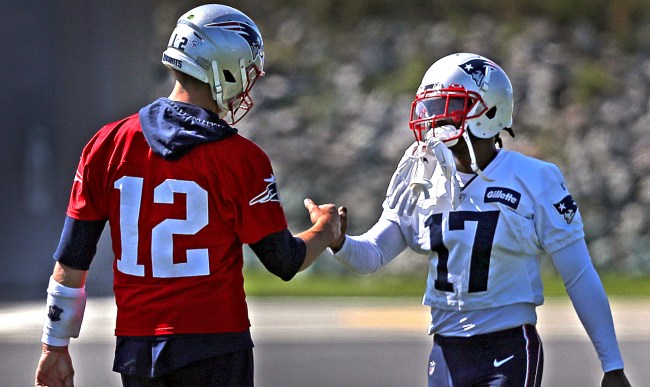 Don’t let his perfect fake teeth, plastic skin, and family man charade fool you: Tom Brady is a dog. The man is a savage whose number one goal in this life is to win — nothing else.

Now, while that very attitude is what drove the six-time Super Bowl winner to become the greatest quarterback of all-time, it also turns him into the slimeball that’s desperate for a clearly mentally disturbed and accused sexual assaulter on his team.

Yesterday said mentally disturbed and alleged sexual assaulter Antonio Brown posted a half-hearted apology to New England Patriots owner Robert Kraft on Twitter and Instagram. And who woulda guessed it? Tom Brady liked the shit out of that apology… on both social media platforms.

To be fair to ole Tommy Boy, he wasn’t the only thirsty Patriot showing AB some love, as fellow key players such as Julian Edelman, Stephon Gilmore, Brandon Bolden, and Phillip Dorsett also liked the apology.

Not that it’s surprising, but Tom Brady is among several Patriots to like Antonio Brown’s apology on Instagram pic.twitter.com/g7TIq63CSY

The Patriots’ apparent acceptance of Antonio Brown’s apology comes just days after Brady could be seen cutting a frustrated figure following the Patriots 17-point offensive output against the Eagles.

Against the three decent teams they’ve played so far this season — the Philadelphia Eagles, the Baltimore Ravens, and the Buffalo Bills — the Patriots have scored just 17, 20, and 16 points, respectively. The Patriots are 2-1 in those games.

While the team clearly has a championship-caliber defense at their disposal — arguably one of the best in recent memory — the recent struggles of their offense is clearly causing concern up in Foxboro.