Bengals RB Joe Mixon Fangirled Tom Brady So Hard After The Game, Brady Agreed To Send Him His Jersey 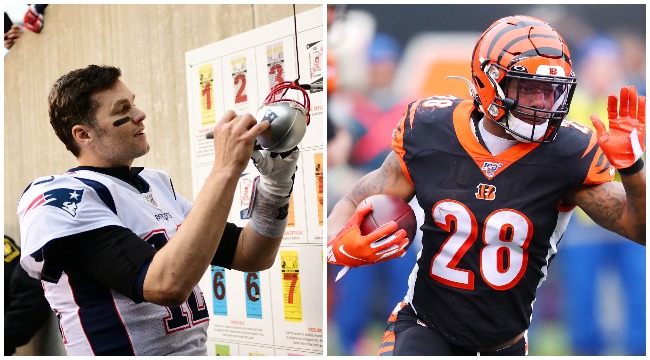 Say what you will about Tom Brady playing like microwaved doo doo over the past month or subscribe to the notion that Brady is officially washed, but some of the most impressive athletes on the planet still devolve into teenage girls at a One Direction concert when they are in his presence.

On Sunday, Brady came into Cincinnati and secured a 34-13 win over the putrid Bengals, who at this point have the confidence of Stephen Glansburg going to junior prom stag.

That’s why even the most trivial interaction with arguably the greatest quarterback in the history of the game is a giant win for anyone wearing orange and black.

Bruh.. I still can’t believe I shook @TomBrady hand today and had a lil conversation with him😂 I ain’t gone lie I wanted to ask for his jersey but was too scared to ask🤦🏽‍♂️😂

Keep in mind, Mixon was the only bright spot in a sucky Bengals offense, with the 23-year-old Oklahoma product totaling 156 total yards (136 rushing, 20 receiving) in the loss.

Mixon went total fangirl detailing their exchange after the game.

Brady caught wind of Mixon’s admiration for him, and agreed to send him his jersey and maybe a lock of his hair I don’t know.

Carlos Dunlap, who is a certified beast, has already succumbed to his team being one of the worst in NFL history, so right now, it’s all about getting highlight clips to show his children. Not many human beings can say they sacked TB12.

Come on, Tom. At least send Carlos a keychain or something.