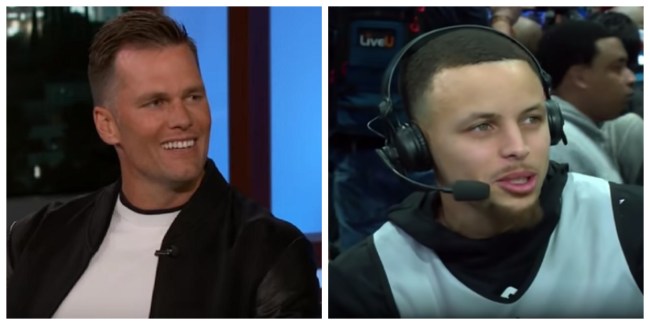 Tom Brady and Stephen Curry are two of the biggest, most popular and most successful athletes on the planet right now, with each winning two titles in their respective sports in two of the past three years. Brady’s dominance in the NFL is wild considering he’s about to turn 42 years old and was the 199th overall pick in his draft class, while Curry’s in the NBA is amazing given he, like Brady, was doubted coming out of a small college like Davidson. But both guys quieted any criticism by working hard and using any negative talk about their games as fuel to prove people wrong.

But what makes Tom Brady and Stephen Curry so different than regular Joes? According to filmmaker Gotham Chopra — who worked with both Brady and Curry on separate Facebook series’, “Tom vs Time” and “Stephen vs The Game” — it’s their passion, focus and endless motivation.

In an interview with the Boston Globe, Chopra explains the similarities he saw with Tom Brady and Stephen Curry while working with both of them, describing how they’re wired differently than most people, including other pro athletes.

“They’re very different, as a lot of these guys are, just in terms of personality and background,’’ said Chopra. “But there are definitely similarities that have contributed to the incredible success they have had — they’re detail-oriented, passionate about what they do, they are disciplined in terms of training, preparation and focus, almost maniacal, that sort of stuff that not all great athletes maintain.

“They turn doubt into fuel. They’ve both become institutions, but that gives them extra motivation. They don’t want to give up the mountaintop. Steve Kerr in one of the episodes talks about how maintaining greatness is way harder than achieving greatness because when you’re at the top everyone is coming at you, or teammates start fighting to share credit, or money becomes an issue. Managing all of that is harder than being the outsider or underdog trying to get that first chip.”

Given the success of both Tom Brady and Stephen Curry, it’s hard to argue that the two share similar traits that make them both so great. Neither may be the most physically imposing or the most athletic, but because of a drive, passion, focus and ability to just shut up and hustle to outwork their peers, they’re both all-time greats in their respective sports.