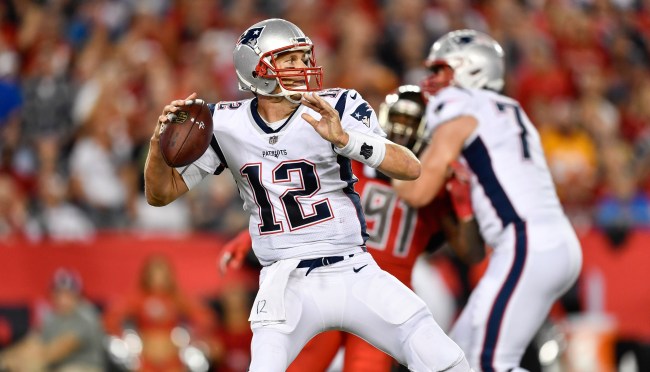 Thanks to the you-know-what, Tom Brady’s first press conference since signing with the Tampa Bay Buccaneers had to be held over the phone instead of in person as it usually is. Which means we didn’t get to see TB12 holding up his new Bucs jersey and shaking hands with the team’s owner Malcolm Glazer.

What we did get was a big batch of very good questions, including those addressed at Buccaneers head coach Bruce Arians, and a lot of semi-interesting answers from the former New England Patriots quarterback.

Calling it an “exciting moment for me in my life,” Brady said his main focus right now is to get to know his new teammates. A task made much more difficult considering the fact that he can’t actually meet with them face-to-face until numerous health-related restrictions are lifted.

“It’s unfortunate what we’re going through in our world,” said Brady about the current situation. “It provides a different challenge for all of us.”

Brady also said he will be spending most of his time studying the opposing defenses he will be facing in the NFC South, learning their schemes, and figuring out the best way to succeed against them.

“There are a lot of things that were intriguing to me about the organization and the players and the coaches and the willingness to try to accomplish what the goal of playing football is, which is to win,” said Brady. “I’m going to try to do everything I can in my position, and what I’m responsible for is to make it happen. I’ver got to trust everyone is doing the exact same thing – no different than what I’ve experienced.”

Brady also admitted that the “transition is very emotional,” but tried his best to keep the focus on the future during the call and not on his time in New England, saying, “I don’t want to talk about the past, because that’s not relevant to my future.”

He did, however, reiterate his admiration for the Patriots’ owner Robert Kraft, coach Bill Belichick, and Patriots president Jonathan Kraft.

“All three of those guys have been involved with so many different decisions in my life that were career-related and personal-related,” said Brady. “I leave there with just a lot of great admiration for people in that organization. It’s a first-class organization in every way. I wanted to leave it that way too.”

As for why he chose Tampa Bay, Brady revealed, “I’m not going to get into everything about the decision. But there were a lot of things that were intriguing to me about the organization, and the players and the coaches, and the willingness to accomplish what the goal of football is – which is to win.”

Tom Brady's introductory press conference with the Buccaneers is at noon today.

One year ago today: pic.twitter.com/E9iiYVKjnj

When asked about the transition to a new kind of offense under coach Arians, Brady replied, “Everybody has different styles and philosophies and how they call things. Football to me is about throwing the ball to the guy who’s open. If he’s open deep, that’s where you throw it.”

“This was, getting to be a free agent and having the opportunity to join the Bucs, was something that I was really excited about,” Brady said about this new stage in his football life. “And that’s why we’re at where we’re at.”