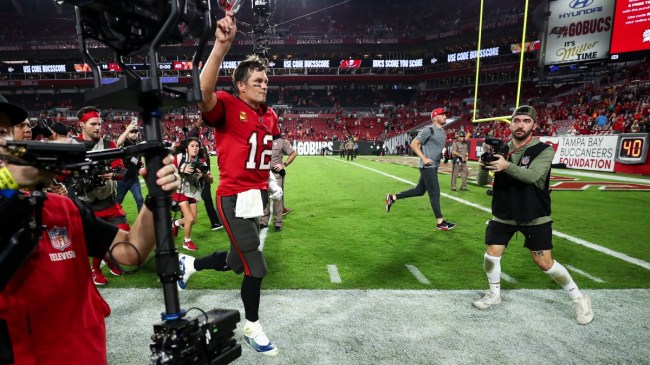 The Tampa Bay Buccaneers had the comeback win of the ages as they stole the victory away from the New Orleans Saints. Tom Brady strikes again, as there is nothing this man can’t do on the football field. After the game, the GOAT shared a hilarious reaction that’s gone viral ever since.

In case you missed it, the Buccaneers came back after being down 16-3. With just three minutes left in the game, Tom Brady put together another comeback for the ages. Here is the touchdown pass he threw to Rachaad White that led to the big win over the Saints.

Tom Brady to Rachaad White and the Bucs come back from 13 points down in the fourth quarter to win.

Tom Brady’s only other 13+ point comeback in the fourth quarter was in Super Bowl LI when the Patriots came back from 28-3 to beat Atlanta.

It was a wild situation overall. The Buccaneers didn’t play great throughout most of the contest. Everything changed though once the team started playing a hurry-up offense. As usual, Brady took the podium for his post-game press conference and opened up with a line that had the room burst out laughing.

Was he doing a set at the Comedy Store? It sure felt like it, as the reaction he got was a roar of laughter. Either way, it was a pretty funny response considering we watched Tom Brady letting his punter have it on the sideline. I mean, he looked furious throughout most of the game.

But hey, a win is a win. The Buccaneers got it done in the closing minutes of the game and Tom Brady is through the roof about it.