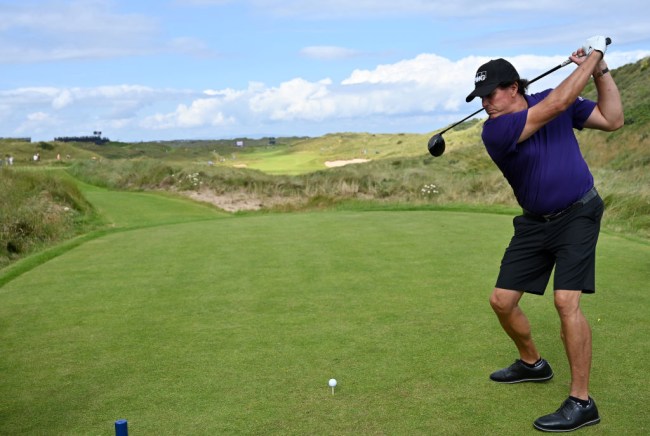 For those that didn’t know, Tom Brady was limited during New England’s Wednesday practice due to a calf injury. That’s right, the best to ever do it took a light workload on Wednesday because his calf muscles weren’t responding correctly.

Do you know who’s calf muscles never fail him? That would be Phil Mickelson, and lefty let Brady know that he was acting like some sort of wimp for being limited in practice.

I’m on standby for a flight to Boston. Let’s not let inadequate calves hold us back. 😎 https://t.co/MQ6IkVNOBo

Mickelson is out here risking it, big time, sitting in terribly uncomfortable airport seats straining his monster calves just for a maybe seat on a flight to come help you, Tom.

Sorry folks, but there are what, maybe 20 or so people that can upstage Brady walking this planet right now? It turns out that Mickelson is one of those people. After all, he has elite calf muscles and he’s not afraid to show ’em.

The reason you can barely see your calves is mine ate them for a mid morning snack. pic.twitter.com/bZdY3KOvU2

I mean, the man even talks that calf-smack to others on social media as you can see from above. You come at the calf king and you are going to lose, plain and simple people.

As for Brady’s calf injury, I’m just going to go out on a limb here and say he may have just needed a little breather today. The man is 42-years-old and has won six Super Bowls. I image he could literally walk into the locker room, not even say anything, look around the room and everyone simply knows he’s going to take it easy that day.

Maybe Brady didn’t sleep well. Maybe he slept in and didn’t have time for a perfect breakfast. Maybe he had his one cheat day for the decade or something, who knows?

Nevertheless, you have to applaud Mickelson to jumping onto the opportunity on social to have a funny dig at Brady and jump in the spotlight. Mickelson is pretty good on the old Twitter, the man knows exactly what he’s doing.

The Pats get to hoast the totally functional Jets this week while Mickelson is probably playing a decent size money game somewhere.