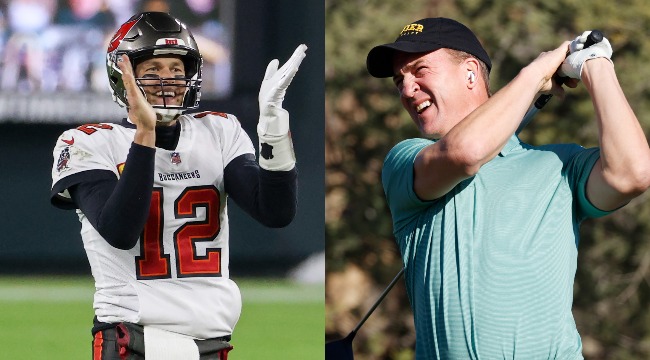 In 2021, pinning Peyton Manning above Tom Brady would earn you a one-way ticket into a straight jacket and padded room.

But in 2014—when Brady had a measly three Super Bowl wins and Peyton had one and his neck hadn’t fallen off yet—the Brady vs. Peyton narrative flooded every sports media publication in existence.

Back then, Peyton was coming off a Super Bowl appearance and his fifth MVP and Brady hadn’t won a Super Bowl since Mariah Carey released her 2005 hit We Belong Together. The Super Bowl blue balls were very real and very evident in a 2014 email he sent to a family member, obtained recently by NFL reporter Dov Kleiman.

This email was sent by Brady to a family member in 2014.

He said Peyton Manning [who retired in 2015] was about done in the league. [At age 38, his arm was falling off] and claimed he can play 7-8 more years.

Brady proved to be clairvoyant, as Manning would retire the following year (after winning his second Super Bowl) and Brady is on the cusp of his TENTH Super Bowl appearance at the age of 82, matching the combined total of Joe Montana, Peyton Manning, Aaron Rodgers, and Dan Marino.

Tom Brady will now start in his 10th Super Bowl, twice as many as any other QB in NFL history.

He's made the Super Bowl in over 50% of his healthy seasons as a starter.

If it’s any consolation for Peyton, he and Joe Flacco still remain the only quarterbacks to ever beat Brady in a conference championship game.

0-3 vs Broncos in Denver

This man is super human.