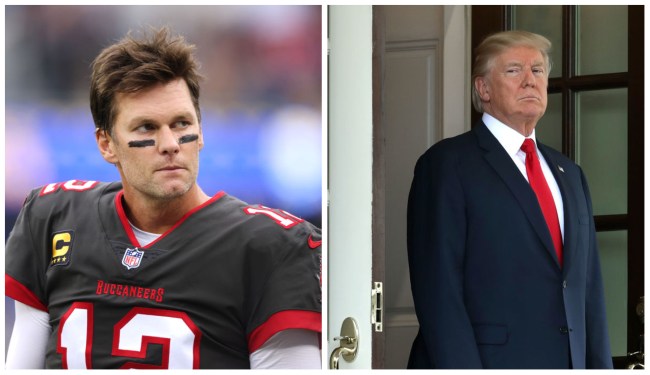 During a recent interview with Variety, legendary NFL quarterback Tom Brady — who is likely entering his 23rd and final season this year — addressed his relationship with former President Trump, which is a topic that he’s avoided in recent years. After famously placing a red “Make America Great Again” hat in his locker during Trump’s initial run for President in 2016, Brady has been largely quiet on the topic since.

While speaking with Variety, though, Brady addressed his relationship with the 45th President of the United States of America, saying that there are aspects of Trump that he both agrees and disagrees with.

Brady also said that he and the former President, who we played golf with “17 or 18 years ago”, are not in touch and have not spoken in”a lot of years.”

The reason that Brady was speaking with Variety, an entertainment publication, is because the production of his upcoming movie 80 For Brady, which he is producing and briefly starring in, began earlier this year. Directed by Kyle Marvin, the film stars Lily Tomlin, Jane Fonda, Rita Moreno, and Sally Field as four women who take a road trip to the 2017 Super Bowl to watch Brady play.

RELATED: Howard Stern’s Interview With Tom Brady Gets Extremely Awkward When Stern Asks Brady About Donald Trump Wanting To Hook Him Up With Ivanka