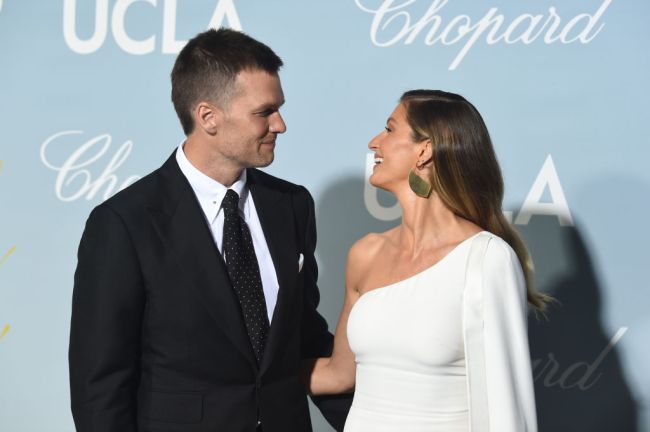 Tom Brady is not only the greatest quarterback of all-time, but he married one of the most beautiful women in the world, Gisele Bundchen. The Brazilian model, actress, activist and business woman speaks Portuguese, French, Spanish and English, and has an estimated net worth of nearly double that of her husband. Apparently, she also is quick to use her quadrilingual abilities to crack jokes at her husband’s expense without him knowing.

Brady, who is gearing up for his 10th Super Bowl appearance on Sunday, was asked about his Portuguese skills during a media session on Wednesday and admitted that he is behind in his abilities. He also shared that Bundchen taught both of their children how to speak her native language from a young age, with his daughter Vivian being fluent.

“My Portuguese, let me say this: My son, who’s 10, his Portuguese is amazing,” Brady said. “My 8-year-old daughter is fluent in Portuguese. And unfortunately, their dad is way behind in his understanding of how to speak the language.”

As a result, the three love to roast Brady without him knowing. The 43-year-old quarterback says that he can understand a lot of what is being said, or at least gather that he’s the butt of the joke through context and tone. Of the things that Bundchen likes to say, ‘Papai não sabe nada” is atop the list, translating to “Daddy doesn’t know anything.”

Brady will try to win his seventh Super Bowl against the Chiefs this weekend and doesn’t show signs of stopping. If he ever does decide to hang up the cleats, maybe he will learn how to fire back at his family in his wife’s native tongue.