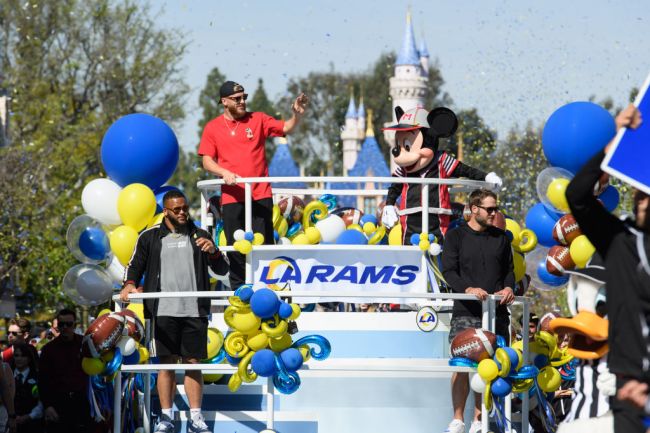 If there is anybody in the sports world who knows a thing or two about championship parades, it’s Tom Brady. He has been to 7 Super Bowl parades after all.

During his time in New England, the most notable moments at those parades consisted of some talk about everybody counting them out and Bill Belichick trying to get people to chant “no days off”.

That changed when he got to Tampa Bay. Brady was finally able to let loose during his parade with the Bucs and that led to few moments that will be remembered long after people start to actually believe we’ll never see Brady on a football field again.

During his most fun parade, the GOAT threw the Lombardi Trophy from one boat to another and while getting off the boat, needed his teammates to help him walk.

It was a very different celebration for Tom Brady than the ones he had with the Pats and it would appear it came with some lessons. Today, he passed on the wisdom gained to this year’s winning quarterback.

Matt Stafford is having a new experience of his own this season, getting to celebrate a year that didn’t end with the usual Detroit Lions misery. Maybe he could use a little bit of guidance on how to handle his first Super Bowl parade from the leading expert on the subject.

Hopefully Matt Stafford listens to Brady’s advice to get through the day smoothly, but it must be tough to think about when the beer is flowing and you’re celebrating a Super Bowl win. If he doesn’t listen, he has the next few months to make sure he stays hydrated before the Rams start working on defending their title.