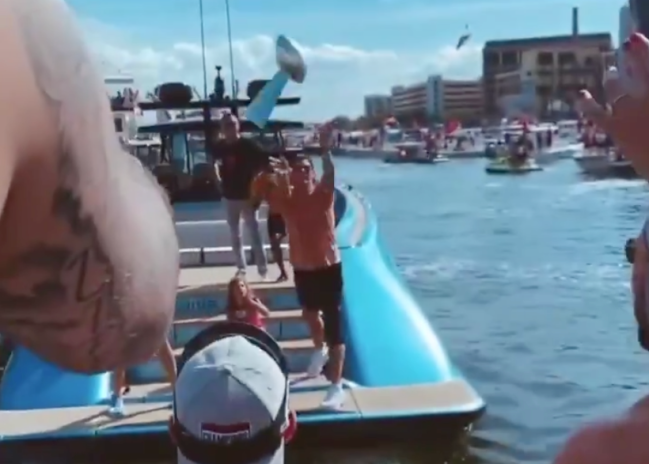 Tom Brady is no stranger to completing bold passes. The seven-time Super Bowl champion put an exclamation point on his career as the greatest quarterback in NFL history with Sunday’s victory over the Kansas City Chiefs and brought Tampa Bay its second NFL Championship in the process. He followed it up with one of the best throws of his 21 seasons in the league during Wednesday’s celebratory boat parade on the Hillsborough River.

After beginning the afternoon with the Lombardi Trophy on his $2 million yacht, Brady decided it was time to share the love and let someone else have a chance with the hardware. He walked out to the edge of his boat and threw the trophy a solid 10 yards to the boat behind him. Fortunately, the receiving boat was exactly that, packed with Mike Evans, Scotty Miller, Cameron Brate and Rob Gronkowski. Gronk made the catch and saved the $10,000 trophy from falling into the water.

It was a pretty significant toss.

The most impressive pitch and catch of @TomBrady's career 🤯🏆

This is not the first time that Brady and Gronk have connected for an important throw-and-catch! The duo accounted for 14 of Tampa Bay’s 31 points on Sunday, and they’ve been doing it for years. Their first touchdown in the first quarter set the outright playoff record for most passing touchdowns by a quarterback-pass catcher tandem in NFL history, breaking a tie at 12 with Joe Montana and Jerry Rice. Brady found his tight end again in the second quarter, hitting Gronk for a 17-yard touchdown that vaulted him into second all-time with 13 playoff touchdown catches. Jerry Rice is first with 22.

But did Joe Montana ever drunkenly throw the Super Bowl trophy from boat to boat during a championship boat parade? I think not.