Tom Brady Struggles Mightily Early On In ‘The Match’, Later Shuts The Haters Up With A Crazy Hole Out 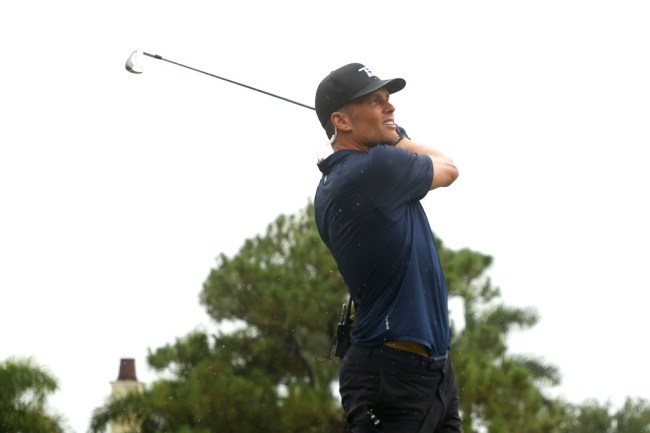 One of the biggest questions heading into Sunday’s The Match: Champions for Charity was which of the amateurs, Tom Brady or Peyton Manning, was going to struggle the most. The heavy rain and delayed start certainly didn’t help things, but Brady has gotten off to quite the slow start.

It’s hard to talk poorly about a six-time Super Bowl champion and the greatest quarterback in NFL history when it comes to literally any sports on the planet given what he’s accomplished on the gridiron, but Tom Brady stinks at golf. Sure, you can chalk some of his struggles up to having a bad day and being completely out of his element, but he’s been horrendous.

We should’ve known early on that it was going to be a long day for Brady. He didn’t seem too thrilled to be playing in a legitimate monsoon, which I can’t really blame him.

Tom Brady seems THRILLED to be out there hitting balls in a monsoon😂 pic.twitter.com/FbRz5LaMJf

Brady kept the driver in the bag through the first three holes in an attempt to keep the ball in play off the tee, but that strategy didn’t work. He was missing fairways and battling the BIG right miss and it all sort of unfolded on the third tee box. He hit two tee shots well, well right and Tiger Woods had to do a little chirping.

Things did not get any better for him soon thereafter. While he did get a stroke on the hole, he didn’t take advantage of that thanks to a flubbed chip just short of the green.

Things got even worse on the Par 3 fourth hole. Charles Barkley put up $50k of his own money for charity if Brady managed to find the green, but that did not happen. Barkley roasted him after his very poor shot, too.

Charles Barkley said he’d donate 50k if Tom Brady hit the green. He did not.

“I shoulda just said if you could keep it on the planet.”😂 pic.twitter.com/zFftRAQ1y1

Can you sense a common theme here? Brady then stepped to the fifth tee and proceeded to find the drink as he day continued to go from bad to worse.

We were bound for some sort of Brady magic on Sunday though. While he couldn’t find the center of the clubface nor come close to making a par through the first six holes, he pulled off the shot of the match up to that point by holing out from the fairway. It was legitimately the first good shot he had hit all day.

Brady would be well on his way to posting something in the triple digits on his own ball today, but hey, he delivered quite the memorable moment. Golf remains to be a weird game.