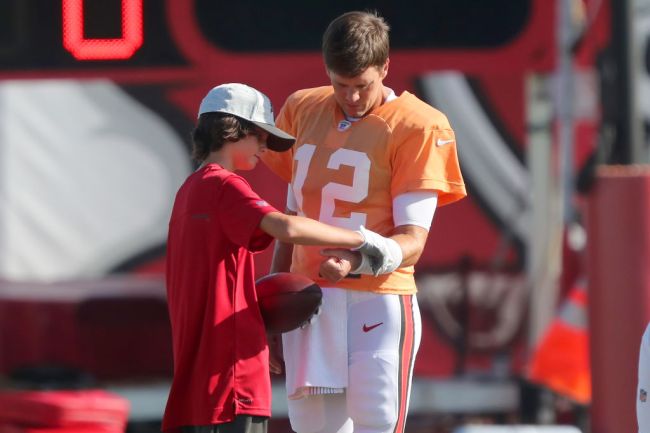 Tom Brady’s 13-year-old son Jack is spending time with his dad working as a ball boy for the Bucs over the summer but some people aren’t happy about it.

Brady even went on to talk about how he much he has enjoyed Jack’s presence at Bucs camp.

Bucs QB Tom Brady on having his 13-year-old son, Jack, working as a ball boy this week. They ran sprints together following practice. “It’s great. He’s at a good age,” Brady said. pic.twitter.com/da3NTG2BIt

“It’s great,” “He’s at a good age. The more I get to do with him the better it is. We have a great time together and it’s really a treat for me to have him. He thinks it’s fun but it’s probably way better for me having him out here. It’s really, really cool.”

“He’s just a great kid. I don’t want to blow his head up too much. He probably wouldn’t even read this. Just a real special kid. It’s fun to be with him. He’s good with everything, you know, let’s run, go on the boat, let’s golf, let’s ride bikes and he is pretty cool with anything.”

Some people like Deadspin’s Rob Parker feel like Brady bringing his son in as a ball boy is nepotism and ripped him in article.

Parker wasn’t the only one angry about Brady’s son serving as a ball boy for the Bucs.