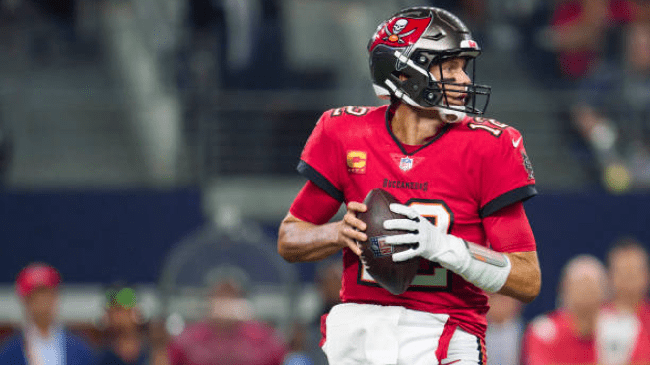 There aren’t any teams in the NFL who can consider it good news when they see they have a matchup against Tom Brady coming up on their schedule. There is no franchise in the league that actually has a winning record against him.

There are a few teams that have managed to reach .500 against Brady, but for everybody else, a visit from the GOAT means a loss more often than not.

While a matchup against him isn’t good news for anybody, there are a few teams around the league who it is particularly bad news for. One of those teams is the Dallas Cowboys.

Brady had a 6-0 record against the Cowboys heading into Sunday night’s matchup, a record he easily improved to 7-0.

A clip from the game showing Brady having a conversation with Mike Evans has revealed that Brady was well aware of this stat heading into his most recent matchup against the Cowboys.

The Cowboys are actually one of 5 NFL teams that have never managed to beat Tom Brady. Brady has also never lost to either of the teams he’s played for, holding a 4-0 record against the Bucs before joining their squad and beating the Patriots in his first matchup against his old team last year.

The 4th team Brady is undefeated against is the Minnesota Vikings. Brady has beaten them 6 times.

The team Brady has played the most without suffering a defeat is the Atlanta Falcons. Brady has beaten them all 10 times they have met, with one of those meetings holding a bit of extra significance.

Luckily for the Cowboys, this may be the last time they ever run into Brady.