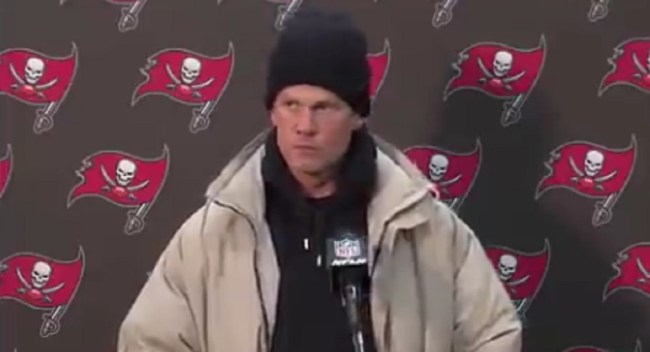 Tom Brady was in no mood to talk after losing to WFT.

On Sunday, Brady threw two interceptions that ended up costing his team in the game.

Bucs are coming off a bye week. pic.twitter.com/Bg2wZk2vKP

After the loss, Brady attempted to end his postgame press conference after only sixty seconds and taking about three questions from reporters.

Tom Brady tried to end his postgame press conference after 60 seconds. You can hear reporters say..”that’s it??” pic.twitter.com/UHJprhwgNX

Brady stayed on for about 40 more seconds when reporters asked him to take more questions before he abruptly stormed off.

Tom Brady’s entire media availability lasted 1 minute, 43 seconds. You can hear @gregauman ask him to stay longer. I asked if he could take us through how he was feeling. “I like to win,” he said. pic.twitter.com/DHXxvg021N

Fans went on to blast Brady for attempting to avoid the media after a loss.

No one loves the opposing QB and the media more after a win than Tom Brady. But when he loses… https://t.co/j8PAs373wJ

"make it quick" right off the bat. mans done had a bad day https://t.co/bqZ5R1EmtR

Simultaneously, a rookie Trevor Lawrence just met with reporters for 7 minutes after fumbling the would-be game-winning drive away. Went through every play, question in excruciating detail. https://t.co/lUnQqnWFkJ

Florida Tom has definitely gotten soft in the cold. Probably not even that cold in D.C today https://t.co/EMoE2GLmpm