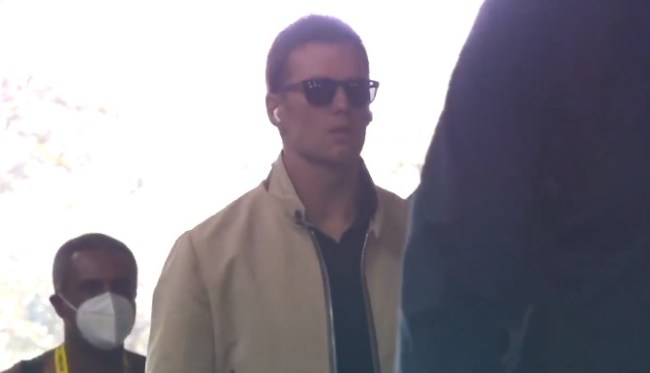 42-year-old Tampa Bay Bucs quarterback Tom Brady arrived at Raymond James Stadium three hours before the start of Sunday’s Super Bowl and people on the Internet were annoyed with his Covid-19 mask etiquette.

As Brady was filmed walking into the stadium, many noticed Brady was the only person around him not wearing a mask.

What is up with Tom Brady walking into the stadium maskless! Only person in the video without a mask! Come on Tom. Really? pic.twitter.com/HHjGiuM9gd

Literally everyone else around him is wearing a mask. But the most influential person at the #SuperBowl can’t even be bothered to set an important example, much less protect others around him. 🚮 https://t.co/ov9GfhEbz8

Of course Brady is not wearing a mask https://t.co/0x5Yzw2xTz

Why’s he the only one not wearing a mask? Does he think he’s above everyone else?

I don’t know, but I can tell you what he’s NOT listening to: medical experts and the NFL on wearing a mask https://t.co/BU5Av8kXk9

Kind of Tired of watching Tom Brady parade around everywhere without a mask on while literally everyone around him has one on. What gives?

Tom Brady is dang near the protected age group and he the only one there without a mask on #SuperBowl pic.twitter.com/BDiWCLhwFv

Brady received similar criticism following the NFC championship game when he was the only Bucs player not wearing a mask during the team’s celebration.

Tom Brady is the only Bucs player not wearing a mask?

Apparently not very concerned about Covid protocols preventing him from playing in the Super Bowl pic.twitter.com/ourQLZbvW5